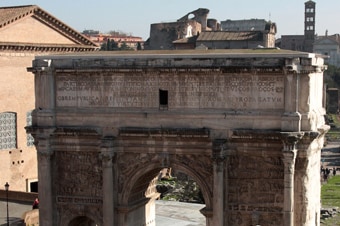 Board your motorcoach for the approximately 1 1/2 hour drive from Civitavecchia to Rome, enjoying views of the countryside and the Tyrrhennian Sea. Your scenic drive through Rome passes famous landmarks including the Arch of Constantine, the Circus Maximus, the Villa Borghese and the Castel S'Angelo. Disembark near the Colosseum for your walking of the ancient city.

To the Romans, the massive ruin we know as the Colosseum was the Amphitheatrum Flavium, named for the dynasty of emperors who oversaw its construction and completion from 72 - 96 A.D. This enormous arena featured 76 numbered entrances and seating for 50,000 spectators. Gazing down on what was once the arena floor, you can see the Colosseum's subterranean passages where animals and appratus were once housed. The entertainments offered ranged from gladiatorial combats to staged sea battles, historic reenactments and even mass executions. Gladitorial combat lasted until 404 AD, while animal combats endured to the middle of the 6th century. The Colosseum later served as a fortress, prison - even a Christian shrine.

From the Colosseum, make your way past the Arch of Titus - one of the three Flavian emperors who oversaw construction of the great arena - and enter the ruins of the Roman Forum. Nestled between the Capitoline and Palatine Hills, this small valley was the center of political, religious and commercial life in Ancient Rome. Stroll past the ruins of the Temple of Venus and Roma, the Temple of Castor and Pollux, the basilicas of Maxentius and Constantine, and, near the foot of the Capitoline (today's Campidoglio), the great triumphal Arch of Septimius Severus. The ruins bring home the reality of Rome as a world empire that stretched from the Atlantic to the Persian Gulf.

Passing the great triumphal Arch of Septimius Severus, continue to St. Peter's in Chains. The basilica was first built in the middle of the 5th century to house the relic of the chains that bound Saint Peter while imprisoned in Jerusalem, given to Pope Leo I by Empress Eudoxia (wife of Emperor Valentinian III). According to legend, when the pope held them next to the chains from of Peter's first imprisonment in the Mamertine Prison in Rome, the two chains miraculously fused together. The "Mausoleo di Gulio II," created by Michelangelo, was originally intended as part of a funeral monument for Pope Julius II.

After lunch in a local hotel/restaurant, continue to the Vatican and St. Peter's Basilica. The great basilica occupies the spot of St. Peter's reputed martyrdom; Constantine the Great, who made Christianity the state religion of the empire, built the first church here. The Basilica and its superb colonnaded square are one of the glories of Western art and architecture. The greatest talents of the Renaissance labored for decades on St. Peter's, the list of great masters includes Bramante, Michelangelo, Raphael and Bernini. Inside of the basilica stands Michelangelo's greatest masterwork, the Pietà.

After your visit, enjoy time to browse for souvenirs and religious articles before the return trip to Civitavecchia.

Please Note: free time may be modified to adhere to local regulations and guidelines for COVID 19 protocols.

On November 3rd 2019, the Colosseum and Roman Forum will not accept pre-bookings and/or advance reservations for the inside visit. Due to this reason, the tour will operate with an exterior visit only (no inside visit).

Dress conservatively when visiting sacred sites. Attire for both men and women must cover shoulders and legs: miniskirts, shorts and capri pants are not permitted at St. Peter's Basilica. Visitors may be required to check large bags, video cameras and bottled water.

Please note that for tour groups on visit to St. Peter's Basilica the use of headsets owned and provided by the site's management is compulsory. Guests will be responsible for missing headsets. The headsets company will charge Euro 50,00 for every missing device.

Visitors to St. Peter's Basilica may encounter considerable crowds, lines and delays. Should the wait at St. Peter's security checkpoint last longer than 45 minutes, your guide may forego an interior visit. Instead, he or she will provide a full explanation and description while viewing the exterior. Additional shopping time or a free period will be substituted.

Tour groups are not allowed inside St. Peter's Basilica during religious services. However, entry will be allowed on an individual basis to view the interior quietly and reverently. Should a mass be taking place in St. Peter's Basilica, the entrance may be restricted. Please be aware that the Basilica may close for security reasons at any given time without previous notice; this is also the case if on Wednesdays the Pope chooses to hold mass services in St. Peter's Square, also in this case free time will be provided to compensate.

For safety reasons, the Minister of Tourism has established a maximum number of visitors that can be allowed inside the Colosseum at once. As a consequence of this new rule also the access of groups with reservation may be stopped and delayed. Should your guide foresee that the queue at the Colosseum is longer than a 45-minute wait, you will forego the interior visit of the Colosseum and provide guests with an a full explanation while outside followed by free time to compensate.

Due to new regulations established by the Minister of Tourism, on the first Sunday of each month the entrance to the Colosseum is free of charge therefore long lines are expected and entrance to Colosseum cannot be granted.

The guides usually do not accompany the buses from the ship or on the return drive from Rome to Civitavecchia.

This tour involves a great amount of walking, therefore it is not recommended to Guests walking difficulties or using wheelchairs. Guests must be able to negotiate the steps of the coach. Please note that the Roman Forum is not wheelchair accessible.

Tour order may vary but always covering the same sites

Depart from ship for a guided tour of St. Peter's in Chains

Inside visit of the Colosseum