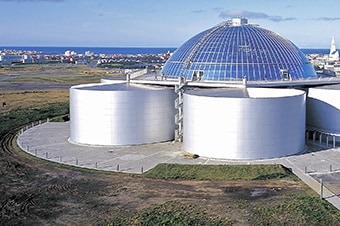 What you will visit:
Árbær Open-Air Museum
More than 20 different buildings are clustered together to create an authentic village, once a working farm. It is comprised of 19th-century houses, a thatch-roofed church, barns and stables, and boathouses on the museum grounds that were removed from the old center of Reykjavik, and their number is constantly growing. The traditional architecture takes guests back in time to a simpler life, and a glimpse of furnishings, artifacts and home goods gives a detailed picture of how Icelanders once lived.
The Pearl
Take in breathtaking views of all of Reykjavik from the viewing platform of The Pearl (Perlan) a futuristic glass-dome structure that supports six massive hot water tanks. From 25 meters high (82 feet), the 360-degree views are fabulous. There is also a revolving restaurant and museum on the premises.

What you will see along the way:
Reykjavík
Situated just 205 miles from the Arctic Circle, Reykjavik is the northernmost capital city in the world, and its Parliament, established in 930 A.D., is the oldest in Europe. Settled by Norwegian and Celtic immigrants during the late 9th and 10th centuries, Reykjavik was named for the columns of steam that rise from the area's hot springs. In the 18th century, Reykjavík developed into a thriving town, and its pedestrian-friendly city center is characterized by the brightly colored corrugated metal siding on its buildings, excellent dining, shopping, art galleries and a lively bar scene. In addition to the highlights visited, you'll pass through the city center for such landmarks as the City Hall and the graceful National Cathedral, completed in 1796 anchoring the city's main square.
Photo Opportunities:
Höfði House - Coach will make a panoramic drive passing the Höfði House
Höfði House in northern Reykjavik is where the important summit between President Ronald Reagan and Secretary General Mikhail Gorbachev took place in 1986.

Kindly note that the running order of visited sites might vary. Iceland Travel reserves the right to run this tour in a reverse order if considered necessary; this could be due to local traffic conditions or in order to avoid congestion at the main sites. Not all coaches in Iceland are equipped with air conditioning, but they do have overhead blowers. Most motorcoaches can accommodate a small number of collapsible wheelchairs in the baggage space under the coach (depending on the capacity of the vehicle), but it is always best to check with Iceland Travel in advance of the call to make sure this is the case. Please note that motorcoaches are filled to approximately 85% of their full capacity. According to the municipality, coaches and very large vehicles are no longer allowed to drive in some areas in the heart of the city. Iceland Travel reserves the right to drive each route for which is allowed at the time, or if roads are closed due to construction etc…

Drive to Árbær Museum and visit

Drive back to Reykjavík, ending at the pier