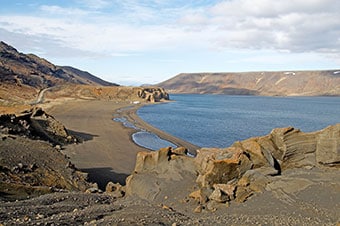 For millions of years Iceland has been one of the most active volcanic regions on Earth and the remains of its geologic history can be seen in the spectacular landscape of craters, lava fields and mud pits. We can only imagine what the Vikings must have thought of this barren and forbidding island when they left verdant Norway and landed here in 874 A.D. During this four-hour excursion you'll learn how the two titanic forces of man and nature helped create the country known as Iceland.

Your adventure begins with a scenic drive through Hafnarfjordur, the third most populous town in Iceland. Sit back and relax as you travel along the coast past Lake Kleifarvatn, which, unfortunately, is draining at a rate of one-third of an inch a day due to a large gash in the earth caused by a series of small quakes over the years.

Then, you'll drive into an unspoiled landscape dotted with incredible displays of wild flowers and grassy lowlandsBut amid this scenic splendor lies the geothermal fields of a restless earth. Krysuvik features natural steam vents, hot springs and, most famously, boiling pools of wildly colored mud known as solfataras. Brimming with sulfur deposits, these steamy mud pits produce crystals that settle on the earth's surface in a spectacular rainbow of bright yellow, red and green hues.

From here you'll venture across the volcanic plateau towards Grindavik, a beautiful little village that dates back to 934 A.D. and boasts one of the most active harbors in the country.

Did you know that the broad bottom of the Viking ships allowed them to land on any sandy beach without the need of a harbor or pier? Learn fascinating facts like this with a tour of Vikingaheimar, also known as Viking World. On permanent display is an amazing full-scale replica of the famous Gokstad Ship, a Viking long ship that was discovered in Norway in 1882 and excavated almost completely intact. This seaworthy ship, Islendingur (the Icelander), was crafted by Gunnar Marel Eggertsson, who sailed the remarkable vessel to America in 2000 in honor of the 1,000-year anniversary of Leif Eriksson and Bjarni Herjolfsson's discovery of North America. This nearly four-month trip involved stops at 22 harbors and a hearty crew of eight.

On your return trip to the pier you'll drive back through the Reykjanes peninsula, the southwestern most point of Iceland and also the youngest. The North Atlantic ridge comes ashore here and visible signs of volcanic activity can be seen all over the peninsula.

The weather in Iceland is very unpredictable. TO recommends wearing sturdy, closed toe footwear with a non-skid sole, and waterproof outerwear.

Krysuvik has wooden steps and platforms and guests may not step off those paths. It can destroy vegetation and / or cause serious burns and injury.

The wooden steps at the Krysuvik hot springs can be quite uneven, we kindly ask guests to take caution when walking in that area.