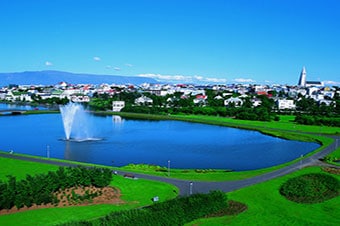 Designed for travelers who prefer a minimum amount of walking but a maximum amount of scenery. You'll board your motorcoach and set out on two hour excursion to view a sample of Hafnafjordur and Reykjavik's ancient and modern past. A guide will be onboard to point out the city's fascinating points of interest and share stories of the Viking explorers who settled over a thousand years ago.

Hafnarfjörður is a friendly seaside community, home to varied birdlife, numerous natural wonders and for the true believers, the home to 'huldufolk', those mysterious but friendly elves who live in the many lava rocks that are scattered throughout the town. Hafnarfjörður is also known as the town of lava and Vikings and it has a very nice town center that you'll be able to see on your panoramic drive. Your guide might perhaps tell you some Viking or elves' tales and if you are a true believer, maybe you'll see some 'huldufolk' before making your way back to the capital, Reykjavik.

Settled by Norwegian and Celtic immigrants during the late 9th and 10th centuries, legends say the ancient gods guided Norseman Ingolfur Arnarsson to make his home in Reykjavik around 870. Meaning 'bay of smoke' or 'steamy bay' Reykjavik was named for the columns of steam that rose from the area's hot springs. Just 205 miles from the Arctic Circle, Reykjavik is the northernmost capital city in the world and its Parliament, established in 930 A.D. is the oldest in Europe.

As you wind your way through the city you'll pass the many landmarks and attractions that make this city memorable.

From Laugardalur, we continue on the scenic road that leads us to Bessastaðir peninsula, where the residence of the President of Iceland is located. From this beautiful peninsula you have a great view over to Reykjavik (weather permitting).

In the northern part of the city, there is the iconic and charming Höfdi house, site of the Iceland Summit. It was here that in October, 1986 US President Ronald Reagan and Mikhail Gorbachev, Secretary-General of the Soviet Union, met to discuss the intermediate range nuclear forces treaty between the two countries.

Your drive continues past Hallgrímskirkja Church before you head through some parts of the charming old quarter of Reykjavik with its colorful wooden houses and narrow streets. You will then drive through the University of Iceland complex and after that, along the city lake, Tjornin with its rich birdlife before heading towards the old harbour area.

After seeing this sample of what Reykjavík has to offer you'll, return to port along the same scenic route.

We reserve the right to reverse the itinerary if necessary.
According to the municipality, coaches and very large vehicles are no longer allowed to drive in some areas in the heart of the city, including the old quarter of the city center. Iceland Travel reserves the right to drive each route for which is allowed at the time, or if roads are closed due to construction etc…

Depart from ship and drive to Hafnafjordur and back to Reykjavik

Narrated city tour and return to your ship