Best of the Golden Circle 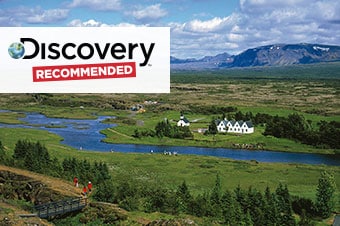 Behold the magnificence of Iceland, including the country's three most famous landmarks known together as the Golden Circle, during this full-day journey that commences with a scenic drive through Reykjavik with city sights highlighted along the way. Continue on through dramatic countryside to cross the Moorlands Mosfellsheidi, an ancient undulating field of lava. Eventually, reach Thingvellir National Park, which was established in 1930 as a protected area of genuine historical, cultural and geological value. This breathtaking rift valley offers incredible views of the Reykjanes Ridge, an aboveground portion of the Mid-Atlantic Ridge, which separates the Eurasian and North American plates. In addition to Thingvallavatn, Iceland's largest natural lake, the area's fascinating terrain features low birch, willow trees and blueberry heather, which grow around dense areas of basalt lava. Listen as your guide describes how the park is tied to the formation of Althing (Icelandic Parliament), which began meeting in 930 A.D. under a towering cliff along the western wall.

Continue on to witness the grand beauty of the Golden Circle's second stop, Gullfoss Waterfall, which inspires awe with its natural, three-tiered curving stone cascade over which water rushes and tumbles until it plunges down a deep ravine. Soak up the splendor of Iceland's most famous waterfall from a far or bravely wander out along the narrow, steep grass and gravel paths for a closer look.

Next, travel to the Golden Circle's final stop, Strokkur, an amazing explosive geyser that erupts every few minutes. Stand back to witness the mind-blowing power of the steamy spouts, which erupt from the ground at boiling temps and blast as high as 60 feet. Take in the algal deposits and hot springs, best seen while walking through the enclosure. At a local restaurant, savor an Icelandic meal including soup of the day, poached salmon and potatoes, followed by fresh coffee and a small piece of chocolate. Before leaving, comb through the nearby shop for must-have souvenirs.

After lunch, enjoy a relaxing drive passing Hengill region, a mountain resting on a volcanic ridge, to visit Hellisheidi Power Station, the second largest power plant in the world and the largest in Iceland. Building on geothermal forces generated by three volcanic systems dating back 11,000 years, this impressive plant began generating electricity in 2006 and set its sights on generating hot water. This hot water plant was introduced in 2010 and the last two high pressures 45 MW turbines were added in 2011. While taking in the plant, marvel at the mountain plateau's post-glacial lava fields, a fascinating moonscape here on Earth.

The drive between Reykjavik and the Strokkur Geyser is approximately 1 3/4-hours each way.

The weather in Iceland is very unpredictable. TO recommends wearing sturdy, closed toe footwear with a non-skid sole, and waterproof outerwear.

At Thingvellir National Park, the coach parks on an upper level (aka Hakid) where guests can have a great view of the park. The guide will walk with the group through the tectonic rift. The coach picks up group at the lowel level parking lot. Guests can opt to stay on the upper level and skip walking through the rift, but they are responsible on getting back to the coach on time and go with the driver to pick up rest of the group. Guests thus need to pay special attention to the guide explaining when to be at the bus, and remember the bus number. Guides usually wait 15-20 minutes for missing guests, then continues the tour.

Strokkur Geyser does not spout to any set pattern, and it is difficult to predict when exactly it might spout. Consequently, the area around the geyser is roped off, and it is strictly forbidden to cross over any of the roped areas. If you do cross over the ropes, it may result in serious burns and injury and destroys vegetation.

We reserve the right to reverse the itinerary if necessary.

Drive to Gullfoss Waterfall and visit