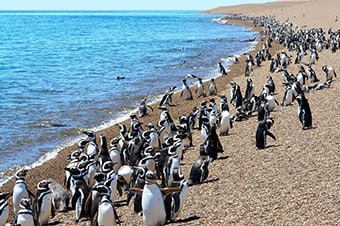 Board your transportation and cross the Carlos Ameghino Isthmus to the Valdes Peninsula. Designated an UNESCO World Heritage Site in 1999, the Peninsula comprises over 1,500 square miles of headlands, salt water lakes, depressions and rocky cliffs jutting 30 miles into the Atlantic. The surrounding shallow bays, gulfs and beaches make the Peninsula one of the most diverse bio habitats in the Southern Peninsula. Over half of the world's Southern right whale population, for example, frequent the waters off the Valdes Peninsula, which are also home to major colonies of seals, sea lions and sea birds.

Enjoy a brief stop at the small Visitors Center to view exhibits on the flora and fauna of the Valdes Peninsula. Continue to Punta Norte, stopping to view Isla de los Pajaros, an offshore island and bird sanctuary that is off-limits to humans. Disembark at Punta Norte, and trek over the beach to a large colony of sea lions and elephant seals. The pinnipeds make for good photographs, but do not approach too closely. They are territorial.

Re-embark your transportation and travel along the peninsula, enjoying views of its harsh, windswept landscape en route to Estancia San Lorenzo. This family-owned sheep station stretches along the shores of the Golfo de San Matias and is home to the world's largest nesting colony for Magellanic penguins. an immense colony of nesting Magellanic penguins. Take a trip to the colony - over 600,000 nesting Magellanic penguins inhabit the immense rookery. Keep an eye open for other wildlife including rheas (flightless, ostrich-like birds), guanacos (related to alpacas and llamas), and elephant seals. View fossilized oysters and see the remains of an old sea lion colony.

After your wildlife viewing, return to the Estancia for a hearty lunch of barbecued lamb and chicken. Board your motorcoach for the return trip to Puerto Madryn.

Wildlife watching is not guaranteed.

Arrive at the Ranch - Visit of the Penguin Colony & Lunch