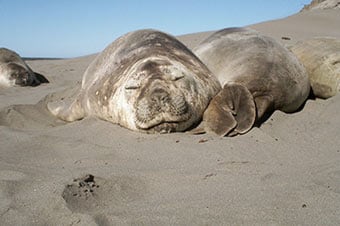 Board your transportation and travel to the eastern shore of the Valdes Peninsula. Designated an UNESCO World Heritage Site in 1999, the Peninsula comprises over 1,500 square miles of headlands, salt water lakes and rocky cliffs jutting 30 miles into the Atlantic. The surrounding shallow bays, gulfs and beaches make the Peninsula one of the most diverse bio habitats in the Southern Peninsula. Over half of the world's Southern right whale population, for example, frequents the waters off the Valdes Peninsula between June and December, which is also home to major colonies of seals, sea lions and sea birds.

Enjoy a brief stop at the small Visitors Center to view exhibits on the flora and fauna of the Valdes Peninsula. Continue to Caleta Valdes, a shallow lagoon protected by a hook-shaped gravel spit. Elephant seals frequent the lagoon to bask on the shingle during the spring months. (Orcas also make an appearance offshore, hunting marine mammals like the seals.) Guanacos are often seen along the beach. Related to alpacas and llamas, guanacos are members of the camel family. Stop to inspect a new penguin colony that is forming along the lagoon.

Drive to Puerto Piramide, a village of some 400 souls on the Golfo Nuevo. From June through December, the gulf is frequented by large numbers of Southern right whales. Your destination is one of the peninsula's major sea lion rookeries. Walk across the beach to photograph the sea lions. After viewing the rookery, board your transportation for the return trip to Puerto Madryn.

Wildlife watching is not guaranteed.

Depart from ship and drive to Peninsula Valdes & Caleta Valdes