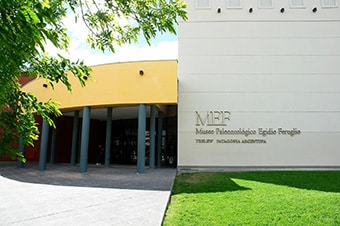 From Puerto Madryn, in the Patagonian province of Chubut, you'll venture across the Patagonian steppe to the quaint Welsh town of Trelew. Here you'll find reminders of the Welsh immigrants who left their mark on this picturesque town. But the main reason for your visit is the Paleontological Museum which houses an extensive fossil collection depicting 300 million years of natural history.

Acclaimed worldwide since in many cases the collection is based on original pieces instead of copies, the museum features different eras and types of dinosaurs, chronologically ordered, with each one featuring a distinctive environment with the appropriate flora and fauna. The museum has a wall inside that recreates a remote World Heritage Site of the Hands Cave in which prehistoric cave dwellers adorned the walls with the image of numerous painted hands. Rendered in negative and positive, contoured in red, ochre, yellow, green, white and black; and with many of the hands overlapping each other, the design is sophisticated and aesthetically pleasing.

There are also guanaco silhouettes, human figures in motion, dots and concentric circles all of which combine to stir the imagination while inspiring flights of fancy as you attempt to place yourself within the realm of the artist's point of view. There is an area devoted to sea fossils and a very interesting video about the origins of the universe and its evolution.

With some complete dinosaur skeleton replicas and some of the most significant flora and fauna fossil samples from the Patagonia, it's no wonder this is considered to be the most important paleontological museum in South America.

Continue this easy, half-day tour with a stop at Punta Loma, you'll have the unique opportunity to view a significant population of South American sea lions. Enjoy the easy walk to a cliff-top vantage point for panoramic views overlooking the sea lion breeding ground; keeping your camera handy for the fantastic nature shots that are sure to develop!

Then you'll complete your journey with the scenic drive back to Puerto Madryn. Perched on the Nuevo Gulfo with the Valdes Peninsula to the north and Punta Ninfas to the south, the city boasts an interesting history. Long after the Spanish explorers landed, the area was settled by Welsh colonists who left Great Britain seeking autonomy for their culture and language. The original settlers came ashore in July 1865 and named their first settlement Porth Madryn in honor of Baron Madryn of Wales. Over time, the colonists spread and founded other towns, maintaining their language, customs and architectural styles. While other cities in the province retain much of their Welsh heritage, in Puerto Madryn, only the street names remain.

Wildlife watching is no guaranteed.

Depart from ship for a photo stop for Punta Loma

Inside visit of the Paleontology Museum