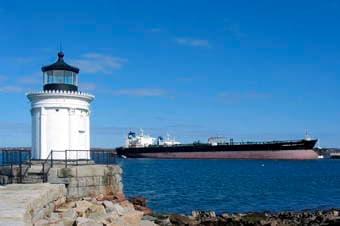 Board your air-conditioned transportation for a scenic drive through Portland, voted one of America's "most livable cities" by Forbes Magazine. You'll travel along the Eastern Promenade which features panoramic views of Casco Bay and the Calendar Islands. You'll continue on past the Portland Observatory, the new Arts district, and Old Port, the city's thriving commercial and business community. Then you'll head out to some of Maine's historic lighthouses.

Standing strong on Casco Bay's coast is a trio of lighthouses that are architecturally different yet share the same purpose. Designed to help ships navigate around Portland's rocky shoreline, many have been restored and each offers a look back at Maine's past. The Portland Breakwater lighthouse is known locally as the "Bug Light" because at 27 feet in height, it's shorter than the average lighthouse. Built in 1875 and considered by many as the most elegant of all Maine's lighthouses, the design was modeled after an ancient Greek monument built in the 4th century BC. Nearby is the Liberty Ship Memorial commemorating the ships that were constructed during World War II.

The Spring Point Ledge lighthouse beckons next. Constructed in 1891 after many vessels ran aground on the area's dangerous rocky coast, it's still in use today as an active aid to navigation. The last lighthouse is Portland Head Light the oldest lighthouse in Maine. Commissioned by President Washington in 1797 and dedicated by the Marquis de Lafayette, it was the first lighthouse completed by the newly created U.S. government and is listed on the U.S. Register of Historic Places. Your visit here includes a narrated discovery of the museum housed in the former lighthouse keepers' quarters. Your tour concludes with a scenic trip back to the pier.

Depart the Portland Headlight Lighthouse and return to the pier