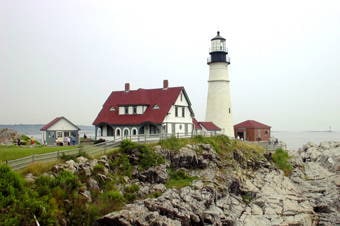 Sitting on a peninsula that juts out into Casco Bay and surrounded by a beautiful seascape and rugged coastline, Portland is rich in history as well as scenery. Explored and mapped by Captain John Smith in 1615, Portland has evolved from a trading post in 1628 to Maine's largest city with a unique blend of history, museums and thriving commercial center. It's no wonder that it's been voted one of America's "most livable cities" by Forbes Magazine.

Your guided tour through Portland begins at the dock and a drive along the Eastern Promenade with stunning views of Casco Bay and the Calendar Islands. You'll continue past some of the city's most beautiful Victorian mansions, many of which are on the National Register of Historic Places. Once the homes of wealthy sea merchants, today many stand as a reminder of a gentler time and place.

Be sure to have your camera ready when you disembark at Fort Williams Park. Situated in the town of Cape Elizabeth (named for Elizabeth of Bohemia, sister of England's King Charles I), Fort Williams was once an Army outpost. Commissioned in 1899, it was active from the Spanish-American War to the Korean War. It's also the home to Portland Head Light, the oldest lighthouse in Maine and listed on the U.S. Register of Historic Places. Commissioned by President Washington in 1797 who requested that it be built from local rubblestone and dedicated by the Marquis de Lafayette, it was the first lighthouse completed by the newly created U.S. government. Standing 80 feet above the rocky headland and 101 feet above the icy blue waters of Casco Bay, its white conical tower with rambling red roofs makes Portland Head Light not only Portland's most recognizable landmark but the most photographed lighthouse in the U.S.

Following your visit you'll re-board your transportation for a scenic drive back to the pier.

Tour may operate in alternative order. Participants must be able to walk approximately 200 yards (optional) over even surfaces with 2 to 3 steps.

Depart the Portland Headlight Lighthouse and return to the pier