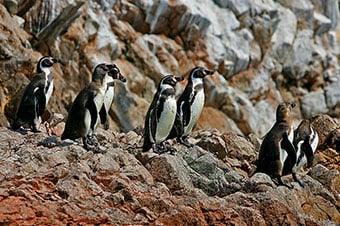 Just eleven miles offshore the enchanted world of Islas Ballestas beckons to the adventurous traveler. Here you can get up close to sea lion colonies and bird rookeries for incredible wildlife viewing in the "Galapagos of Peru."

You'll cruise aboard a specially-designed sightseeing boat enjoying informed narration from your friendly guide. Together, you'll delve into the fascinating natural history of the Paracas National Reserve to which the Humboldt Current brings cool waters and an abundant food supply. As you trace the island's rugged shores, marvel at the dramatic terrain. Peer through graceful arches and ponder mysterious caves where the hand of Nature has sculpted with the help of wind and wave. Watch lacy kelp beds ebb and flow, listen to the noisy bark of basking sea lions, and gaze into crystal clear waters where pelicans, cormorants and terns dive for silver-backed fish.

In addition to fur seals, this pristine island sanctuary is home to the endangered Humboldt Penguin. These charming little animals are distinguished by their diminutive size and by the white eye band circling a sleek black head. While their range and numbers are greatly reduced, they have been protected in these waters since 2010. It is a rare privilege to be able to view them in their natural habitat and to laugh at their antics as they bob in the water or waddle along the shore.

Peruvian boobies share breeding grounds and food stocks with Humboldt penguins and other seabirds and seem to have adapted well to the fluctuating anchovy population. Watch in awe at plunge dives, usually in groups of more than 30-40 individuals. The beautiful Inca tern is identified by its dark grey body, white moustache, and red-orange beak and feet. Particularly photogenic, you'll want to capture indelible images of this appealing bird as it makes its living in the nutrient rich waters of the Humboldt Current. There are so many fascinating animals to see in abundance on this breathtaking wildlife cruise. And your boating excursion also lets you linger in awe before another marvel, one whose very existence has puzzled the world since it was first discovered centuries ago.

The famous three-pronged Candelabra geoglyph, a giant figure nearly 500 feet high and 164 feet wide, is etched into the sand of an imposing coastal headland. Your captain will maneuver his craft offshore so you can soak it all in. You guide will describe several theories that have arisen over the years in an attempt to explain this enigmatic image. Some connect it to the famed Nazca Lines; while others propound that it served as a navigational guide for ancient sailors. Some even believe it to have been inspired by a local cactus species with hallucinogenic properties.

Said to have been created around 500 AD, this mind-boggling geoglpyh remains a mystery. It's all part of a wondrous day of discovery off the coast of Peru on a moderate half-day adventure you're not likely to forget.

The launches afford little protection from the sea, sun or wind; therefore, bring a hat, sunscreen, a light jacket or sweater, and wear low-heeled, rubber-soled walking shoes. Passengers are required to wear a life jacket.

Not recommended for people with mobility and or walking problems.

Depart from ship for a scenic cruise around the Islas Balletas