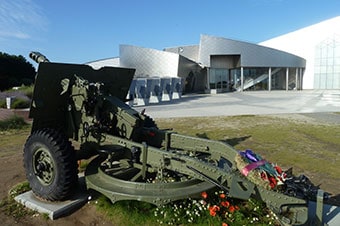 Your tour begins as you board your motorcoach for a scenic, two-hour drive to Courseulles sur Mer along the coast. Upon arrival, you will visit the Canadian Juno Beach Centre and Juno Beach.

Today, the Juno Beach Centre is what the veterans wanted it to be: a place of education providing a better understanding of the contribution Canada made during the Second World War. At the same time, by showcasing today's Canada, it is a place where visitors from all around the world learn more about Canadian values and culture. In this respect, the Centre stands as both the Canadian Second World War Memorial and Education Centre in Europe and as a testament to the Veterans who helped build it. The Minister of Canadian Heritage has designated Juno Beach as a site of national historic significance to Canada.

Following a short drive, you will arrive at Arromanches Beach for lunch which is served at a local restaurant. You will dine on salad, chicken supreme a la normande, kir aperitif and wine, on the menu. After a sumptuous meal, you will have some free time to view the remnants of Mulberry Harbor, the artificial harbor where thousands of troops came ashore.

Your tour continues with a short drive to Longues sur Mer, this battery which gave the allied ships a pounding on the morning of June 6th, is the only coastal battery to have kept its guns. Built on a rather picturesque cliff, it was composed of four 150mm guns with a range of 20 km. In spite of the release by 124 RAF planes of 600tons of bombs during the night preceding 6th June, the four guns were still operational on the morning of 6th June and they began firing at 5:37 am. The Battery was only finally reduced to silence at 7pm by two direct hits. The observation post and control room were the setting of one of the most famous scenes of the film 'The Longest Day'.

Your last stop will be the Canadian Cemetery and the Canada House. On D-Day alone, Canada suffered almost a thousand casualties, of whom 340 were killed or died of wounds. The list lengthened during the following days as the Germans sought desperately to drive the invaders out. The men who fell on the beaches and in the bitter bridgehead battles are buried in Beny-sur-Mer Canadian War Cemetery which, despite its name, is near the village of Reviers. The cemetery contains 2,049 headstones enclosed by pines and maples. These mark the dead of the 3rd Division and the graves of 15 airmen.

Your tour concludes with a relaxing drive back to the pier.

The drive between Le Havre and the Landing Beaches is approx 2 hours each way.

If this tour is sold out, guests might also be interested in LEH-145: The Battle of Normandy Memorial Tour

Lunch and free time in Arromanches

Drive back to Le Havre