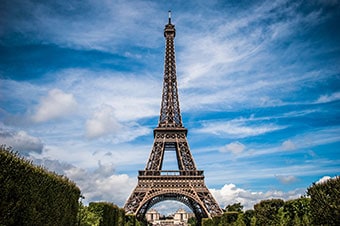 Your tour begins as you board your motorcoach for a scenic, three-hour drive via the motorway to Paris. Keep your camera ready, as there are photo opportunities at every turn.

Upon arriving in Paris your sightseeing drive will take you pass the Place de l'Opera, often called the Hub of the Universe, and considered one of the most elegant streets in Paris with its well-designed houses and luxury shops. Also on your itinerary is Pont Neuf, 'the new bridge,' now the oldest bridge in Paris, and the Louvre Museum. You'll also witness Tuileries Gardens, a stretch of French style alleys and lawns along the Seine River right bank, before reaching Place de la Concorde, the largest square in Paris.

A stop will be made for a magnificent photo opportunity of the Eiffel Tower. The tower was built for the World's Fair in 1889, held in celebration of the French Revolution in 1789. In 1916, the first wireless telephones were tested on the tower. Although meant to last for the duration of the World's Fair, the Eiffel Tower still stands today, despite all protests that this huge 'object' wouldn't fit into the architecture of Paris. Today, the Eiffel Tower is a beloved landmark of Paris and is the symbol of the 'City of Light.'

Next, you'll embark on a leisurely cruise along the scenic Seine aboard a Parisian riverboat ' Onboard, you'll dine on a complimentary French lunch while enjoying a musical performance. Feel free to sit back and relax with a glass of wine, while taking in the the Palais de Chaillot, the Eiffel Tower, the Musee d'Orsay, the Louvre and the Ile de la Cite, one of two natural islands in the Seine within the city of Paris. Also within sight are the Conciergerie, a former royal palace on the west of the Île de la Cité, the Palais de Justice and the Cathedral of Notre Dame.

Your tour concludes with a drive back to the pier.

The drive between Le Havre and Paris is approximately three hours each way.

Shopping is limited on: Sunday

Scenic cruise on the River Seine including lunch and entertainment