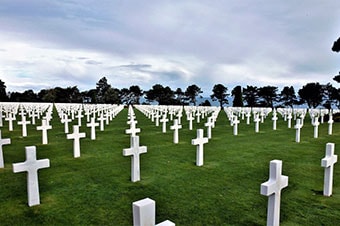 Your tour begins as you board your motorcoach for a scenic, 2 ½-hour drive to Courseulles sur Mer along the coast, passing the Juno and Gold landing sites along the way.

You'll arrive at Arromanches Beach, where you'll see remnants of the Mulberry, the artificial harbor where thousands of troops came ashore. Built on the site of the harbor is the Museum of the Landing Day. The museum commemorates the D-Day landings, with models, dioramas and a short film depicting the monumental exploits and heroic sacrifices of Allied forces in Operation Overlord. Before departing for lunch, you'll have free time to browse for souvenirs at the gift shop.

A lunch is served at a local restaurant, with pave d'Isigny salad, chicken supreme a la normande, kir aperitif and wine, on the menu. After a sumptuous meal, you'll continue to Colleville-Sur-Mer, home to the World War II Normandy American Cemetery and Memorial.

Just above Omaha Beach, a place where the American military suffered staggering casualties on D-Day, the American Cemetery is the final resting place of nearly 10,000 servicemen who died during the Normandy campaign. You'll walk between the rows of marble crosses and Stars of David stretching as far as the eye can see, and witness a memorial and chapel that flank the sea of graves. You'll also visit the new Visitors Centre that presents exhibitions on Operation Overlord and focuses on three major themes: the Competence, the Courage and the Sacrifice.

Next, you'll make a photo stop at Omaha Beach. Notoriously, the American troops who landed at Omaha Beach suffered the worst on D-Day. The bombardments before the Landings proved ineffective in wiping out the many German positions in the area. The infantry coming ashore were decimated by German fire across the long beaches. Despite heavy losses, small groups of Americans made it up the slopes and took German positions from behind, so victory was gained, if at heavy human cost.

Your tour concludes with a relaxing drive back to the pier.

The drive between Le Havre and the Landing Beaches is approximately 2.5 hours each way.

If this tour is sold out, guests might also be interested in LEH-145: The Battle of Normandy Memorial Tour

Lunch at a leading local restaurant

Visit to the American Cemetery and photo stop for Omaha Beach