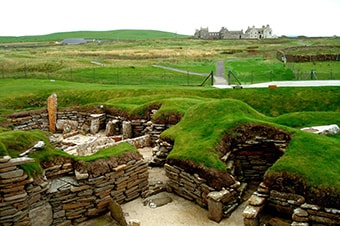 There's something for everyone on this grand tour of all of Orkney's famed sights – a perfect blend of Neolithic history, wartime heritage and cultural highlights topped off by a single malt whisky! Enjoy it all on this full-day Discovery Exclusive adventure.

Board the comfortable motorcoach and begin your day traveling along the shore of Scapa Flow, one of the Royal Navy's main bases during two World Wars, for a guided visit to Orkney's symbol of reconciliation and peace, the Italian Chapel. Built by Italian prisoners of war, including gifted Italian painter Domenico Chiocchetti, out of two Nissen huts, scrap iron and concrete. Chiocchetti stayed to finish it even after the war ended. The interior of the chapel features wrought iron tracery, medieval-style wall paintings and frescoes.

From here, continue on to the Highland Park Distillery for a VIP tour and expert tasting. Highland Park's award-winning single malt whisky owes its flavor to the fire used to dry the malt. The local peat has absorbed centuries of sea spray, imparting a heathery quality to the whisky. Your visit to the 200-year-old distillery begins with an audio-video presentation and is followed by a walk through the distillery that takes in all phases of production. Sample a three different drams of Highland Park expressions and perhaps purchase a bottle in the small shop.

Your day continues with a step back in time, to the far north end of Scotland, where more than 5,000 years ago a prehistoric civilization erected spectacular stone monuments made out of stone and set within remote natural landscapes. Travel into the Heart of Neolithic Orkney, the Islands' UNESCO World Heritage site, a geographical area which comprises the Standing Stones of Stenness, Ring of Brodgar, Skara Brae, Maeshowe Tomb as well as other minor monuments.

Pass by the Standing Stones of Stenness, one of the oldest stone circles in Britain, featuring vertical stones standing up to 15 feet tall laid out in an ellipse.

Next, visit the Ring of Brodgar where you'll immediately be struck by the power of the third-largest stone circle in the British Isles. A guided tour will introduce you to these 27 ceremonial stones thought to have been used to study the stars and believed to be part of an original array of more than 60 stones erected more than 4,500 years ago.

Stop to photograph the Cliffs of Yesnaby, towering sandstone cliffs, which loom dramatically over turbulent waves that thunder and crash into secret caves.

Your destination is Skara Brae, the region's most famous archaeological site, considered one of the most remarkable monuments in Europe. Skara Brae was revealed after a great storm battered Orkney in 1850, unearthing hints of a number of stone buildings that lay below. Excavations in 1868 and in 1925 revealed an intact village of 10 stone homes believed to have been occupied between roughly 3180 B.C. and 2500 B.C. – older than both Stonehenge and the Great Pyramids! Conclude with a tour through the grand Skaill House, overlooking the spectacular Bay of Skaill. This fine, 17th century mansion was originally the home of William Graham Watt who unearthed the village of Skara Brae in 1850.

Relax on your return to port.

Passengers must follow the guides instructions at Yesnaby, as the ground is lose and the cliffs are prone to collapsing.

Depart from the ship by Motorcoach. Drive to the Italian Chapel

Depart for Ring of Brodgar via Scapa Flow

Arrive Ring of Brodgar for a guided tour

Depart for Skara Brae with a photo stop Cliffs of Yesnaby