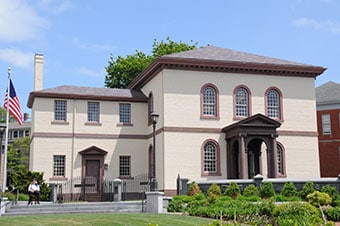 Since its founding in 1639 Newport has served as a welcoming refuge. Seeking religious freedom a large number of Quakers settled here in the early 17th century; Jews fleeing the Inquisition in Spain and Portugal arrived in 1658. About 200 years later, Newport was a vital link in the Gilded Age and the wealthiest of Americans like the Vanderbilts and the Astors wishing to escape the city's heat built jaw-dropping mansions on Bellevue Avenue. Witness its history and beauty on a half-day tour that begins at the pier. Sit back, relax and enjoy the scenic drive as you drive through the streets of Newport.

Learn how the town's historic section was saved from urbanization as you travel past Trinity Church, a National Historic Landmark. Built in 1726, it's the oldest Episcopal parish in the state. According to legend, George Washington attended services here in 1781 (and worshipped in pew 81). Further on is the Church of Saint Mary's. Built between 1848 and 1852, the complex includes the Gothic Revival church, a parish house dating back to 1865 and a convent built in 1925. The church was added to the National Register of Historic Places in 2008.

Then, travel along Ocean Drive and be prepared to ooh and aah as the magnificent coastal scenery passes by your window. Have your camera ready as you turn onto Bellevue Avenue to view the palatial mansions called "summer cottages" by the wealthy.
One of the first residences you'll see is The Elms, completed in 1901 at a cost reported at approximately $1.4 million. Behind the imposing limestone façade, the National Historic Landmark boasts a grand ballroom, a salon, a dining room, a breakfast room, a library, a conservatory, and a grand hallway with a marble floor.

Another splendid example of the Gilded Age is Marble House, recognized as a National Historic Landmark. Built between 1888 and 1892 for Mr. and Mrs. William K. Vanderbilt at a cost of $11 million, the mansion was intended as a birthday present for his wife.
The architectural beauty of the 1902 Rosecliff mansion is a real movie star. Scenes from "The Great Gatsby," "True Lies," and "Amistad" have been shot here. Designed by architect Stanford White Rosecliff resembles the Grand Trianon, the garden retreat of French kings at Versailles.
Next is a stop at the John L. Loeb, Jr. Visitors Center at the Touro Synagogue, the oldest acting synagogue in the United States. During a 25-minute presentation learn how the Visitors Center celebrates the importance of the freedom of religion and freedom of speech. After the presentation you're free to explore the Loeb Center.

At the completion of your tour, you may opt to remain in town for independent sightseeing and shopping or return back to the tender pier via your transportation.

The Loeb Center is completely accessible, but ramps need to be put up for entrance to the synagogue for ADA guests. Guests must be able to navigate the 6 steps to enter the synagogue, unless advance notice is given, so the ramp can be set up.

Depart pier on a scenic drive of Newport