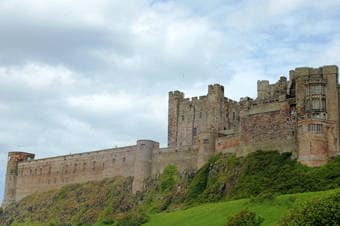 Bamburgh Castle
Perched high above the North Sea on a craggy outcrop, Bamburgh Castle, considered one of the most significant castles in the United Kingdom, was the fortified home of the kings of Northumberland during the Anglo-Saxon period. It has been extensively restored, first by Lord Crewe in the 1750s and more recently by the first Lord Armstrong at the end of the 19th century. Today, Bamburgh is still in use as a private home by the Armstrong family, and a tour of its lavish interior includes views of the ornate staterooms and family heirlooms and artifacts. Outside, the extensive grounds include towers, stables and gatehouses.

Lindisfarne Priory
During low tide, cross over the causeway to the island of Lindisfarne, where ancient monks built their priory, one of the most important centers of early Christianity in Anglo-Saxon England, founded here as early as 635 AD. Step back in time during exploration of the 12th-century ruins of the richly decorated priory church, gaze up at the Rainbow Arch, one of the most striking architectural features still standing, and take in the picturesque vistas of the Northumberland Coast.

Settle into your comfortable motorcoach and depart from the port of Tyne into Northumberland, admiring the area's unspoiled beauty, picturesque vistas and coastline views dotted with dramatic castles, fine-sand beaches and spectacular shorelines. At low tide, cross over the tidal causeway to the Holy Island of Lindisfarne, a designated nature reserve with distinct flora and rich birdlife that makes it popular with ornithologists. From Bamburgh Castle, take in stunning views of the Farne Islands and Holy Island. On the return drive, you'll pass through lovely farmland with views of the remote Cheviot Hills.

Snack:
Lunch is not offered on this tour, but there will be an opportunity to purchase refreshments.

Lunch is not included on this tour, but we will have the opportunity to purchase refreshments.

From the motorcoach drop-off, there is an uphill walk of approximately 5 minutes to Bamburgh Castle. Guests are required to negotiate uneven flights of steps. Not suitable for passengers with limited mobility.

This tour is subject to the tides, it can only run when the causeway is safe to cross

Reboard your motorcoach adn return to the ship