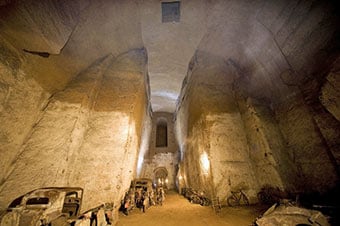 Naples Highlights (walking tour)
A walking tour of Naples is the best way to see the sights and absorb the exciting pulse of the city. Take in highlights of over 2,800 years of history, displayed in splendid castles, fountains, churches and piazzas. Leafy public parks like Villa Comunale and Parco Virgiliano are the perfect spot to soak up local color, and 40 meters below the city is an unexpected system of subterranean Greco-Roman tunnels, revealing ancient catacombs and the ruined remains of temples, aqueducts, theaters and World War II air raid shelters.

Naples Galleria Borbonica
Some 150 years after Ferdinand II of Bourbon and his architect Errico Alvino designed it, the Bourbon Gallery (Galleria Borbonica) is the most beautiful underground tour through the Naples "below." See the aqueduct of Carmignano, which served the city of Naples during the 600s; a military path of the 19th century named "Bourbon Gallery; " the bomb shelters used during WWII; and buried vintage cars and motorbikes.

What you will see along the way:
Start your tour at the historic port guarded by the imposing Castel Nuovo, which looms over the harbor. Continue to the heart of the city, the Piazza del Plebiscito, dominated by the Royal Palace of Naples with its formidable, red façade featuring the statues of the eight kings. Admire the Church of San Francesco di Paola, the Teatro di San Carlo, a UNESCO World Heritage Site, and the Galleria Umberto. Tour the Naples Galleria Borbonica and see the aqueduct of Carmignano. At the end of the walk through the tunnel, you'll arrive at Naples' shoreline, where you'll see the famous Egg Castle in Santa Lucia.

Photo Opportunities:
Bring your camera, as around every bend there is something picture-perfect to see. Don't miss the iconic Egg Castle, a fortified castle perched in the Bay of Naples. The site was originally settled by Greek colonists in the 6th century B.C. After a checkered past, a castle was built by the Normans on the site in the 12th century. The current castle was built in the 15th century.

Lunch:
Enjoy lunch at a typical Neapolitan pizzeria, where you'll experience the "original pizza" in the city that boasts the world's first pizzeria, established in 1830. Sit back and enjoy classic pizza margherita accompanied by a mixed green salad and beverages..

Tour is not recommended for guests with walking difficulties or suffering from claustrophobia. This tour includes extensive walking on both uneven, flat surfaces and several stone steps.

At the pier, meet your guide to start your walking tour of the Naples main center

Explore Naples seaside and photo stop at Castle of the Egg

Enjoy a pizza style lunch at a typical Pizzeria

Walk back to the pier and re-join your ship