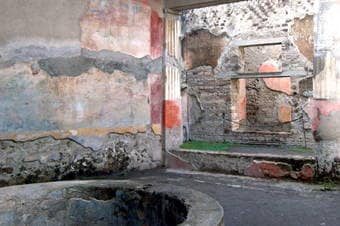 Your tour begins in Naples where you'll board an air-conditioned motorcoach and travel 30 minutes along the coast with magnificent views of the Bay of Naples and Mt. Vesuvius-the still-active volcano that buried Pompeii in 79 A.D.-in the backdrop.

At the Pompeii ruins, you'll discover the archeological excavations of a lost city buried deep beneath the ash from Mt. Vesuvius. Walk the grounds on this 2-hour guided tour of the city. Entering by the sea gate, your walking tour takes in the city's baths, villas, theaters and wrestling grounds. Plaster casts mark the positions of the fallen that were swiftly overcome by volcanic ash. Your knowledgeable guide will point out the remarkably preserved remains that hint at daily Roman life-their customs, cuisine and how they entertained, decorated and lived. Highlights include stunning frescoes and elaborately detailed mosaic-inlaid floors of wealthy homeowners' villas, as Pompeii was a vacation community for high society.

Afterwards, you'll re-board the motorcoach for a 20-minute ride to a cameo factory where artisans have honed their craft for generations. You'll have 30 minutes to shop for handmade seashell and coral jewelry, including intricately carved brooches, rings and bracelets. Enjoy a typical Italian lunch, served at a local restaurant.

Before heading to our next stop in Naples, we'll take a sightseeing loop around the city for a quick orientation, driving past the round-towered Castel Nuovo, San Carlo Opera House, Umberto Gallery, the Royal Palace and San Francesco di Paola Church. As we drive along the waterfront, notice the site where Naples was first founded: Castel dell'Ovo or "egg castle". Its curious name comes from a Roman legend that claimed the castle was built over an egg placed on the site with the belief that if the egg broke Naples would fall.

We'll visit The National Archaeological Museum next. Originally cavalry barracks; Charles of Bourbon established the museum in the late 18th century to house the fantastic Farnese Collection that he had inherited. Highlights include the Farnese Bull, a classical Roman sculpture depicting figures from Greek mythology. The museum possesses an extraordinary collection of murals, frescoes and mosaics from Pompeii and Herculaneum.

We'll have approximately 1 ½ hours to explore the museum before heading back to the pier.

On Tuesdays, a visit of the Royal Palace will be substituted as the Archaeological Museum is closed.
The Magna Grecia Exhibition inside the Museum can no longer be seen as the opening days are not reliable and keep changing. The rest of the Museum will be visited as normal.
This tour uses headsets

Depart from ship for a guided tour of Pompeii

Shopping at a cameo factory in Pompeii

Lunch at a local restaurant