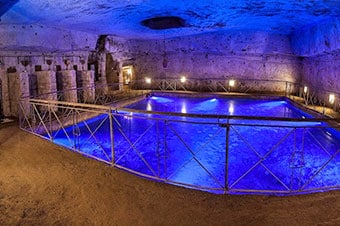 The splendors of Naples unfold beneath your feet on this guided pedestrian tour that spans 2,800 years of the city's history. Then, continue this full-day adventure at Pompeii, where you will view the ancient city's vast archaeological site.

From the moment you set foot on land, you will sense the history that permeates Naples. Look up at Castel Nuovo, an awe-inspiring medieval structure built in 1279 by Charles of Anjou, which looms over the harbor. Its two round towers and Triumphal Arch are excellent specimens of early Renaissance architecture. From here, you will begin your guided walking tour. Narrow streets soon give way to the vast Piazza del Plebiscito, the central square and heart of the city, dominated by the magnificent red façade of the Royal Palace of Naples. Other nearby architectural gems include the Church of San Francesco di Paola, the Teatro di San Carlo, a UNESCO World Heritage Site, and the Galleria Umberto.

Continue your stroll to the Bourbon Gallery and discover a city beneath the city. One hundred feet underground are a series of tunnels, dreamed up by Ferdinand II in 1853 as an escape route from the Royal Palace. They were used as an aqueduct to supply water to the Monte di Dio district until 1866 and during WWII were used as bomb shelters – buried vintage cars and motorbikes can still be found!

You will emerge into the sunlight at the seaside, with a perfect view of the Castle of the Egg in Santa Lucia. Constructed in the 12th century, it got its name from a legend that said if an egg built into the foundation were to crack, then Naples would fall.

By this point, you will have no doubt worked up an appetite, and when in Naples you can't possibly pass up a lunch at a typical Neapolitan pizzeria! Enjoy the "original pizza experience" in the city that claims to have opened the world's first pizzeria back in 1830. Enjoy a classic Pizza Margherita, accompanied by a mixed green salad and beverages.

Refreshed, reboard your motorcoach and head to the ruins of Pompeii for a journey back in time.

Buried deep under the ash that spewed from a violent eruption of Mt. Vesuvius in 79 A.D., Pompeii is a UNESCO World Heritage Site and a remarkably well preserved, excavated city. Your knowledgeable guide will take you through the city's original buildings and homes, describing what daily life was like for the Roman citizens who lived here. A typical home in ancient Pompeii had a plain exterior with bare walls and few windows. But inside, a formal atrium opened up to the sky and was lavishly decorated with mosaics, statues and paintings. Watch your step, as the sidewalks in Pompeii are a foot above the street level.

Tour public areas such as the town's gymnasium, amphitheater and shops. The shops along the Via dell' Abbondanza were open to the street, with the business owners'' living quarters behind or above their stores. The city's complex aqueduct system, which fed fountains and private baths and irrigated crops, demonstrates the Pompeiians'' impressive water management expertise.

Your tour concludes with a relaxing 30-minute drive back to your ship.

Backpacks or bags are not permitted inside the Pompeii excavation.

Tour may operate in reverse order. Use of an audio headset (included) will enhance your tour experience.

Depart the ship and meet your guide. From here, start the walking tour.

Arrive at the Square. Enjoy some free time for a photo opportunity before walking to the "Way of Memories" path.

Transport type:
Walking
Time at site:
00:45
Inside visit:
No

Start the "Way of Memories" path with a local guide; visit the underground Borbonic Gallery

Time at site:
00:90
Inside visit:
Yes
Air conditioned:
No

After your visit, walk to a local Pizzeria. On the way, view the Castel of the Egg and the beautiful waterfront of Naples.

Board a private coach and drive to Pompeii

Arrive; inside visit of Pompeii excavations

Time at site:
02:00
Inside visit:
Yes
Air conditioned:
No