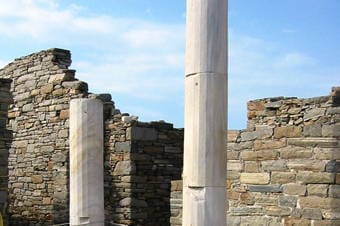 Begin your day at the pier in Mykonos, boarding one of the local kaiki (ferries), which will transport you to the spectacular island of Delos and its most sacred and respected sites.

Your two-hour walking tour begins at the first monument, the Agora of the Competialists. This open area has a round shrine where offerings were placed. To the left you will see the Sacred Way, which leads to the Sanctuary of Apollo. The road is lined with marble platforms, which once held spectacular statues donated by kings. The path you will walk follows the same route as the Delia Festival's annual procession.

Continue to The Sanctuary of Apollo, known as the heart of Delos. At one time, three great temples as well as other altars stood in dedication to the god. In this area you will see the base of the marble Statue of Apollo. Parts of this statue are housed in the Delos museum.

Listen for roaring as you enter the Lion District, named for the famous Terrace of the Lions, where nine elegant marble lions once guarded the sanctuary area. The outdoor lions are now replicas, during your free time you can inside the museum and to see five weathered originals.

Passengers will be transported by local boat from Mykonos to the ancient harbor of Delos island.

The site of Delos will be explored on foot and involves approximately two hours of walking over relatively even terrain. Low heeled comfortable shoes, water and a hat are highly recommended. Passengers with physical limitations are requested to take this into consideration.

Return to the ship