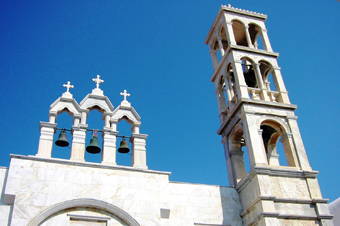 Begin your day at the pier in Mykonos, boarding one of the local ferries which will transport you to the spectacular island of Delos and its most sacred and respected sites.

Your two-hour walking tour begins at the first monument, the Agora of the Competialists. This open area has a round shrine where offerings were placed. To the left you will see the Sacred Way, which leads to the Sanctuary of Apollo. The road is lined with marble platforms, which once held spectacular statues donated by kings.

Continue to The Sanctuary of Apollo, known as the heart of Delos. At one time, three great temples as well as other altars stood in dedication to the god. In this area you will see the base of the marble Statue of Apollo. Parts of this statue are housed in the Delos museum, which you will visit during your free time, and a piece of the foot can be seen in the British Museum.

Listen for roaring as you enter the Lion District, named for the famous Terrace of the Lions, where nine elegant marble lions once guarded the sanctuary area. The outdoor lions are now replicas, but inside the museum you will be able to see five weathered originals.

Upon return to Mykonos, board your motorcoach for a scenic drive through the rocky countryside.

Visit the charming village of Ano Mera at the center of the island, home to the lovely Panagia Tourliani Monastery. Originally built in 1542 and dedicated to the Virgin Mary, its impressive architecture, whitewashed exterior and colored dome have long charmed visitors from around the world.

After a full morning of touring, lunch with wine will be served at a local leading venue.

A welcome respite in your day is a stop at Kalafatis Beach, where the deep blue Aegean Sea and golden sand beckon you for a short stroll in the sunshine. Refreshments are available for purchase from local vendors.

Return to Mykonos for your guided walking tour. Mykonos is a picturesque town with a labyrinth-like maze of tiny streets, white houses and red-roofed churches. Don't be fooled by its small size; it is one of the most cosmopolitan towns of the Aegean. But despite the many shops, boutiques and stylish cafes, the town has not lost its charm and the island's strict building regulations have kept its Cycladic architectural style beautifully intact. Your guided, walking tour through the narrow, winding streets introduces you to some of the area's most treasured landmarks.

Look up and you'll find windmills dotting the landscape. Although no longer operational, they hearken back to the days when the area was once an agricultural powerhouse.

You'll want to have your camera ready to photograph Little Venice, famous for its narrow rows of brightly colored homes that literally sit in the sea. A timeless subject for artists, Little Venice is considered one of the most romantic spots in the Greek Isles.

No tour of Mykonos would be complete without the opportunity to take a photo of Paraportiani Church. Paraportiani is actually five churches, four comprise its base and the fifth is built as the dome on the top.

At the completion of your tour, you are welcome to continue sightseeing on your own. As you walk through the streets, don't be surprised if Petros the Pelican, the island's mascot, pops out to say hello.

Passengers must be able to walk for approximately 3/4 miles over narrow cobble-stoned streets that are uneven in places and have some steps. Passengers with limited mobility should take this into consideration.

Passengers who feel they are unable to participate in the walking tour of the Town of Mykonos will be given the option to return to the ship by motorcoach before the walking tour commences.

The tour finishes in the Mykonos Town after the walking tour. Passengers then have the option of returning to the ship directly or at leisure using the shuttle bus service.