Universal Studios On Your Own 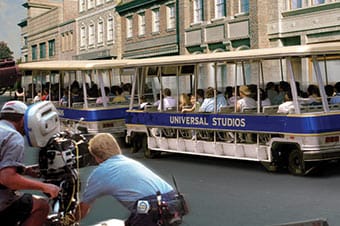 In 1914, a former clothing store owner named Carl Laemmle paid a whopping $3,500 to purchase land in California for his burgeoning film studio. A 100 years later, Laemmle's little studio is the world's largest film and television studio: Universal Studios. And the land he purchased encompasses not only the studio but the renowned Universal Studios Theme Park and the massive City Walk entertainment complex.

Spend a fun-filled half-day exploring this entertainment wonderland on your own! Board your air-conditioned motorcoach at your pier for a scenic drive to the San Fernando Valley.

Step off your motorcoach and walk down the red carpet into the Universal Studios Theme Park - a movie-based theme park featuring several thrilling rides and fascinating shows.

Come face-to-face with a cursed Mummy on the "Revenge of the Mummy" ride. Escape the jaws of a T-Rex on the "Jurassic Park – The Ride". Race, fly and crash your way through the animated world of the Simpsons on a virtual roller coaster. Avoid Frankenstein, the Wolf Man, and other classic Universal monsters.

Want to get a behind-the-scenes look at the magic of movie-making? There's an animal show that showcases trained animal actors. No autographs, please! Get swept up in a spectacular tidal wave of death-defying stunts, awesome explosions and an ocean of thrills at the "Waterworld" show. See how far special effects have come in the last 100 years at "The Special Effects Stage". Get there early if you want to volunteer to be part of the show!

No visit to Universal Studios Theme Park is complete without taking the famous Universal Studios Tram Tour. This premiere behind-the-scenes Hollywood experience offers the rare opportunity to take a sneak peak into the inner workings of a Hollywood movie studio. Travel through the 415-acre movie lot that encompasses nearly every location and time period in the world (Ancient Rome, The Wild West, modern day New York).

You'll come face-to-face with Hollywood icons such as the shark from "Jaws" and even "King Kong," who will attack your tram in eye-popping 3-D! Hear commentary from Hollywood's greatest filmmakers and see some of the most famous sets in movie history (Psycho House, and the plane crash set from Spielberg's "War of the Worlds".)

And since Universal is a working studio, one of the biggest and most unpredictable "attractions" of the Studio Tour is the prospect of seeing a movie star! So keep a keen eye out!

All those carnivorous raptors and sharks may inspire you to indulge in a little lunch. So feel free to venture out of the theme park into the adjacent Universal City. This massive three-block, billion-dollar entertainment, dining and shopping promenade includes more than 30 great places to eat, a 19-screen movie theatre, hot night spots including the Jon Lovitz Comedy Club, indoor skydiving and more than 30 stores!

Following your day of adventure, you'll enjoy a comfortable, relaxing drive back to your pier – equipped with a better understanding of the magic that is movie-making.

This excursion operates as a transfer only and entrance fee only; guide service is not provided. Lunch is not included; food is available for purchase. Extensive walking is required; guests with mobility issues should consider this. Guests are advised to listen carefully to the rendezvous point and time.

This tour does not operate on voyages beginning or ending in Los Angeles.

Depart from ship for your visit to Universal Studios Hollywood