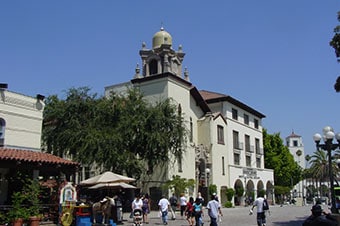 Despite its humble beginnings as a little pueblo, Los Angeles has become one of the most vibrant and progressive cities in the world - rich in ethnic diversity and sizzling culture. Not to mention it is the international headquarters of the glamorous movie industry!

Delve into the history and glamour of the breathtaking "City of Angels" during this half-day, guided driving tour. Begin at your pier where you will board an air-conditioned motorcoach. Then relax as you explore this glittering city.

Palm tree-lined streets beckon you as you traverse the sprawling suburb that is Los Angeles. The flat lands of
the suburbs give way to skyscrapers as you arrive in downtown Los Angeles where you'll enjoy views of the an 11-acre complex that includes the architecturally stunning, stainless-steel Disney Concert Hall designed by architect Frank Gehry.


Glitz and glamour envelope you as you travel along the neon-lit Hollywood Boulevard. A tribute to the entertainment industry, this bustling tourist hotspot is lined with souvenir shops hawking movie memorabilia. It is also home to such popular attractions as Madam Tussaud's Wax Museum and the iconic Hollywood Roosevelt Hotel (site of the 1st Academy Awards in 1929).

Step into the shoes of your favorite stars at the world-famous TCL Chinese Theatre (formerly Grauman's), also located on Hollywood Boulevard. One of the most sought-after locations for movie premieres, this landmark theater (opened in 1927) features a forecourt with over 200 Hollywood celebrity handprints, footprints, and autographs in concrete. Marvel at just how tiny Marilyn Monroe's feet were!

Then stroll along Hollywood Boulevard to check-out the world-renowned Walk of Fame. Encompassing 18 blocks, this sidewalk features over 2,500 terrazzo and brass stars honoring entertainment's brightest stars. See how many you can recognize!

Pause in front of the dazzling Hollywood and Highland, located next door to Grauman's. Once the home of the famed Hollywood Hotel, this 387,000-square-foot entertainment complex includes shops, nightclubs, restaurants, a movie theater, and a bowling alley. It is also site of the Dolby (formerly Kodak) Theater, home of the Academy Awards.

Put on your coolest shades! Back on board your motorcoach, you'll cruise down the hip, famed Sunset Strip. Renowned for restaurants and nightclubs that are playgrounds for the rich and famous, it is also the inspiration for such songs as Don Henley's "Sunset Grill".

As your exploration draws to a close you be transported back to your Princess ship in the glistening waters of San Pedro Harbor.

The content of this tour is identical to LAX-290. Only guests using a wheelchair can book this tour, as it ensures accessible transportation. Due to the specialized nature of some lift-equipped vehicles, priority is given to guests using a wheelchair and one companion only; additional companions may be required to travel on the transportation provided for tour LAX-290. Bookings not marked with an accessibility requirement will be removed from the tour's inventory.

Depart from ship for guided drive through L.A. enroute to Hollywood

Re-board motorcoach and drive down Rodeo Dr. enroute to your ship