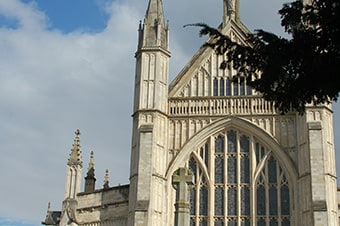 Overflowing with historic buildings, museums and stretches of tranquil green spaces, England's ancient capital is a treasure trove of legend and lore. Your three-hour-and-thirty-minute excursion begins as soon as you board your motorcoach at the pier. Your guide will point out all the area's fascinating facts as you travel through Southampton and along the way to Winchester.

As you make your way through the lush countryside, you'll pass quaint villages, undulating hills and verdant meadows. The history of Winchester is as rich as its surroundings. The town's settlement began about 150 B.C. when a large defended enclosure was created on the western slopes of what is now the modern city, in the area called Oram's Arbour. Since that time, great kings and bishops have left lasting reminders of their presence. And despite Winchester's association with King Alfred, no one has ever found his remains. Thanks to excavations at the end of the 1990s, the location of a medieval abbey church was identified at Hyde, situated on the northern outskirts of the city, and this was found to be the last known resting place of Alfred the Great. But the bodies of Alfred, his Queen and his son who were buried here have never been found.

Your first destination in Winchester is the famous Winchester Cathedral, at 557 feet in length, it's Europe's longest Cathedral. For over a thousand years, this lovely Anglican Cathedral has inspired the faithful, as well as songs, books and legends. Outside, the church is adorned with a Gothic façade, which was added in the 14th century. Inside, the elaborately carved choir stalls feature flowers and plants, owls and monkeys, dragons, knights and green men, 12th century wall paintings, medieval carvings, and contemporary art.

The cathedral's library contains over 4,000 books, including several illuminated manuscripts from the Middle Ages including the beautifully illuminated Winchester Bible.

Did you know that author Jane Austin is buried here? Her grave is marked with a commemorative plaque. Also buried in Winchester Cathedral are the bones of many Saxon kings, the remains of the Viking conqueror Canute and his wife, Emma, and the remains of William Rufus (William II), the son of William the Conqueror.

After your tour, you can walk into the heart of the city and do a little exploring on your own. If you wish to do some shopping, be sure to visit the Kings Walk Antique Market, home to collectibles, jewellery and antiques. High Street, once the Romans' east to west route through the city, boasts boutiques and jewellery stores.

Or, stop by any of the award winning pubs and restaurants that are tucked throughout the city.

At the conclusion of your tour, you'll climb back aboard your motorcoach and return to your ship along the same scenic route.

Winchester Cathedral is a working place of worship and religious events might take place on the day. On Sundays the Cathedral only allows groups from 1:00 PM.

Depart from ship for an inside visit of Winchester Cathedral

Guided walking tour and free time for shopping in Winchester

Transport type:
Walking
Time at site:
01:45
Inside visit:
No