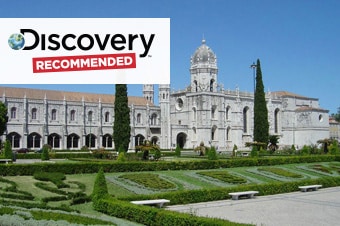 This comprehensive sight-seeing tour of beautiful Lisbon begins at the harbor, when you meet your knowledgeable guide, who will narrate this fabulous half-day excursion.

As well as the major landmarks, you will also enjoy being driven all over the city, traveling first along Alfama district, the Avenue of Liberty and Pombal Square, named after the prime-minister who ruled Portugal from 1750 to 1777.
From Pombal Square, travel across the suspension bridge to the base of the immense statue of Christ the King, where a stop will be made to admire the spectacular view of the city, the harbor and on a clear day you can even catch a glimpse of the coast of Estoril and the mountains of Sintra.

Climbing back onto the bus, you will then head to the Jeronimos Monastery, which was declared a World Heritage Site in 1983. This 16th century monastery, an enticing mixture of Moorish and Gothic styles, was financed by the wealthy spice trade, and is built near the spot where Portuguese explorer, Vasco de Gama, sailed in search of a route to India.
Enjoy an explanation of this architectural marvel from the outside before a short walk to the city's Maritime Museum, which houses an amazing 17,000 items. Located in a building at the fantastic Jeronimos Monastery, the museum focuses on Portugal's pioneering role in sea exploration, and you will have time to view the many displays, that include ship's models, maps and nautical instruments from the Middle Ages.

Your delightful day continues with an outside visit to the ornate Belem Tower, which was built to defend the harbor and sits right on the edge of the Tagus River. This 16th century building served as a prison and lighthouse, and features striking turrets and open balconies.

After exploring this unique landmark, you will then head to the Monument to the Discoveries, for your final photo-stop of the day. This modern monument, situated on the banks of the Tagus, commemorates Portugal's great seafarers, and is shaped like the prow of a boat.

Driving back to your ship, you will pass the Alto do Parque Belvedere, the city's much loved park, and at the 25th of April Bridge, catch a glimpse of the Christ the King monument in the distance, as well as enjoying magnificent views of Lisbon.

Your tour ends at the pier, although you may choose to remain on the bus, and transfer to the Praca do Comercio (Commerce Square) in the city's center, where you will then be responsible for your return to the ship.

Depart from ship through Alfama

Drive to Christ the King belvedere and time for photo

Walk to the Maritime Museum with inside visit

Photo stop for Monument to the Discoveries