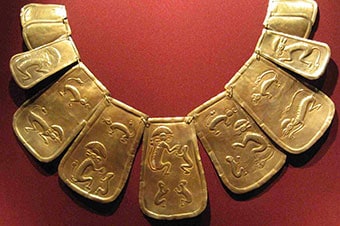 The Gold Museum
Surround yourself with the splendor of pre-Columbian Peru. The renowned Gold Museum dazzles the eyes and staggers the imagination with 20,000 different items of Incan gold collected over a lifetime by local businessman and art lover Miguel Mujica Gallo. You'll find a king's ransom in golden idols, crowns, and scepters, priceless filigree figures depicting everything from men and monkeys to birds and serpents, plus beautifully fashioned necklaces, belts, wristbands, earflaps, pectorals, and shin protectors.

Arms of the World Museum
The Arms of the World Museum also was founded by Miguel Mujica Gallo in 1968. It exhibits 20,000 pieces, including weapons from all over the world, equestrian equipment and implements, uniforms. In ancient times, men exhibited their wealth through their weapons: gold and diamonds, emeralds and opals, rubies and turquoise decorated their swords and sables. The Arms of the World Museum houses six different halls overflowing with a seemingly endless display of weapons, uniforms and other interesting military paraphernalia. There are also items on display from China, Japan, Europe and America that are connected with important people from world history.

The Larco Herrera Museum
Founded in 1926, the Larco Herrera Museum is situated in an elegant vice-royal colonial mansion of the 18th century. Here, you'll enter an ancient world of continual fascination as over 3,000 years of Peru's pre-Columbian history unfold before you. Pore over the finest collection of gold, silver and semiprecious stone artistry in Peru. Study some of the ancient Incan culture's finest examples of textile work and huaco ceramics, and see the tools the masterful artisans used to fashion these timeless treasures. Along the way, you'll learn much about this fascinating culture through thoughtful exhibits designed to reveal how the Incan people defined their religion, their cosmological world and even their own genealogy using the beautiful adornments and artifacts they created.

What you will see along the way:
Lima, the fifth largest city in Latin America, is widely considered to be one of its most beautiful. Sit back and relax as the ever-changing panorama of city sights takes you back in time to the days of the Spanish conquistadors. The Gold Museum of Peru and The Arms of the World Museum are located in Lima's district of Santiago de Surco, a beautiful district with many lush parks and bustling plazas. The Larco Herrera Museum is found in the Pueblo Libre, which displays beautiful restored colonial mansions.

Photos without flash are permitted.

Board your motorcoach and drive to the Gold Museum

Board your motorcoach and drive to Larco Herrera Museum

Board your motorcoach and return to the ship