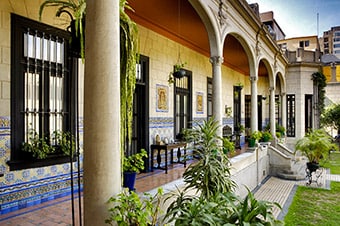 Immerse yourself in the sights and sounds of Peru's capital city with over 2,000 years of Colonial heritage and vivid modern-day scene. Tour Lima's Historical Center, a UNESCO World Heritage site, and explore two landmark churches, enjoying refreshments at the Casa Garcia Alvarado in one of the city's most sought-after districts.

Join your experienced, English-speaking guide for the scenic narrated drive from the pier in the port city of Callao. Soak up the scenery as you enter Lima and an ever-changing backdrop of city sights. Arriving at the Plaza Mayor, where the Presidential Palace, City Hall and Archbishop's Palace stand, you'll lose yourself in the stunning beauty of the Cathedral of Lima, a magnificent example of Spanish colonial architecture.

Entering by the main or central gateway, the "Door of Forgiveness," or via one of two other massive doorways, you'll marvel at the magnificent Churriguerra altars and beautifully-carved wooden choir stalls, but don't miss the signs at the entrance that commemorate the visits of Pope John Paul II. And there are no less than 14 side doors plus a number of chapels, a baptistery, one massive piece of religious art after another and the tomb of the Spanish conquistador, Francisco Pizarro to keep you continually amazed.

Next, visit Santo Domingo Convent, the oldest church and convent in Lima. The foundation of the city of Santo Domingo was conceived by a friar named Tomas de San Martin, who later served as the Preceptor Prior of the Dominican Order. As in all convents located between the jirones of Lima and Camana, Santo Domingo is sort of a city within a city, and is comprised of a succession of cloisters and yards surrounded by service areas and communal rooms. Both Saint Rose and Saint Martin de Porres are buried in Lima, as is the Spanish Saint San Juan Masias. The construction of the Santo Domingo Convent began in 1540, but it was later modernized into its present neo-classical style in the 18th century. In 1730, the greater, or general, hall was built - a work of art that later became a part of the city's more unified ornamental groups.

A refreshment stop at the Casa Garcia Alvarado, provides a glimpse of how life was lived by the Peruvian elite. It was in the early 1900's that the upper class began to build luxury homes in Miraflores, one of the first residential districts to be established outside the downtown district. Built of "quincha" (adobe), decorated with wood on the façade, and containing large inner courtyards, they became the new haven for Peru's most notable families.

The Parque del Amor is the perfect spot to celebrate the romanticism of love. Wander through the gardens, gaze at the sculptures, read the romantic quotes scripted in mosaic tiles and take in the vast expanse of the Pacific Ocean.

With a narrated drive featuring the Plaza Dos de Mayo, the Plaza San Martin and the San Isidro district, you can safely say that your day in Lima has covered all the highlights of this vivacious capital city.

Flash photography is not allowed in the Cathedral or Santo Domingo Monastery. Dress conservatively when visiting religious sites; shorts, tank tops and sports shoes are inappropriate.

The Cathedral is closed on Saturdays in the afternoon, on Sundays and religious holidays.

Not recommended for passengers with backs and those who cannot walk

Depart from ship for a photo stop for Plaza Mayor

Inside visit of Cathedral

Inside visit of San Domingo Monastery