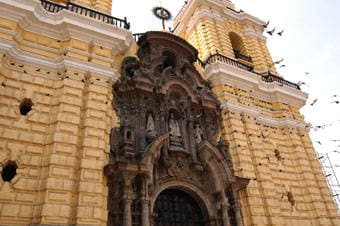 Capture the romance and history of this fascinating region on a moderate full-day tour of the capital of Peru, the legendary "City of the Kings." Join your experienced English-speaking guide for a narrated drive from the port city of Callao to kick off an experience filled with Latin American delight.

Learn why Lima is called the "City of the Kings" a nickname that harkens back to the date of its founding in 1535 on January 6th, the Feast of the Epiphany. Hear about the Spanish Conquest, led by Francisco Pizarro, and envision Lima's evolution from the days of its original Amerindian inhabitants to current times. With a population fast approaching 9 million, Lima is the fifth largest city in Latin America, boasting one of the region's largest financial hubs.

Begin your adventure with a visit to the Cathedral of Lima. Entering by the main or central gateway, the "Door of Forgiveness," or via one of two other massive doorways, you'll marvel at the magnificent Churriguerra altars and beautifully-carved wooden choir stalls.

And there are no less than 14 side doors plus a number of chapels, a baptistery, one massive piece of religious art after another and the tomb of the Spanish conquistador, Francisco Pizarro to keep you continually amazed.

Next, visit Santo Domingo Convent, the oldest church and convent in Lima. The foundation of the city of Santo Domingo was conceived by a friar named Tomas de San Martin, who later served as the Preceptor Prior of the Dominican Order. As in all convents located between the jirones of Lima and Camana, Santo Domingo is sort of a city within a city, and is comprised of a succession of cloisters and yards surrounded by service areas and communal rooms. Both Saint Rose and Saint Martin de Porres are buried in Lima, as is the Spanish Saint San Juan Masias. The construction of the Santo Domingo Convent began in 1540, but it was later modernized into its present neo-classical style in the 18th century. In 1730, the greater, or general, hall was built - a work of art that later became a part of the city's more unified ornamental groups.

At your next stop, surround yourself with the splendor of pre-Columbian Peru. The renowned Gold Museum dazzles the eyes and staggers the imagination with 20,000 different items of Incan gold collected over a lifetime by local businessman and art lover, Miguel Mujica Gallo.

The Parque del Amor is the perfect spot to celebrate romantic love. Located in the exclusive district of Miraflores. Wander through the love-themed gardens and sculptures, read the romantic quotes scripted in mosaic tiles and enjoy the breathtaking views of the Pacific Ocean.

When it's time to eat, you'll stop for a pleasant buffet lunch at a local restaurant. Choose from a wide variety of traditional dishes in a style of local cuisine referred to as "criollo" accompanied by your choice of beverage.

The colorful Indian Market invites you to browse the bustling stalls for traditional Peruvian knitwear, silver, weavings, and ceramics. Choose the perfect memento of your day in Peru and, during the scenic drive back to the pier, pass by numerous points of interest that make Lima such a fascinating place to visit.

Flash photography is not permitted within the interiors of the church or convent. Shorts, tank tops and sports shoes are inappropriate attire for visiting the cathedral.

The Cathedral is closed on Saturdays in the afternoon, on Sundays and religious holidays.

Depart from ship for a photo stop for Plaza Mayor

Inside visit of Cathedral

Inside visit of the Santo Domingo Convent

Inside visit of Gold Museum

Free time for shopping at the Indian Market