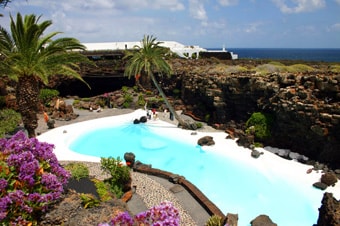 The island of Lanzarote was the canvas of local artist César Manrique. As one of the pioneers of modern art in Spain, his influence as a sculptor, painter and architect is seen throughout the island. His architectural designs integrated Lanzarote's natural landscape creating works of art out of the most simple of materials.

After boarding your air-conditioned motorcoach for the four-hour excursion you'll travel north through the dramatic crater-filled landscape to Los Jameos del Agua. This massive open-air cavern is part of a four-mile long volcanic tunnel that was formed by molten lava after the eruption of the La Corona volcano 3,000 years ago. Due to the pressure built up by volcanic gases, the tunnel collapsed and developed openings in the solidified lava. These openings were discovered in 1968 and, based upon an idea by Manrique, were turned into a tropical garden, a pool, a bar and a 600-seat auditorium.

Upon arrival, a huge lobster sculpture will greet you at the entrance. You'll then climb down a stone staircase into the first cave known as Jameo Chic. From there continue along a pathway that crosses a lake, which is filled with tiny albino crabs, a rare and delicate marine crustacean. Following the footpath you'll make your way to Jameo Grande, a huge open-air cave lined with beautiful tropical plants and a vibrant turquoise pool. At the far end is the auditorium.

Your next destination is Jardín de Cactus, the last work of César Manrique. Completed in 1991, the garden was built on an old quarry of volcanic ash extraction, also known as "rofe" or "picón." At the entrance sits Manrique's towering 26-foot tall green metal cactus. The garden of 10,000 types of cactus from more than 1,400 distinct species is also home to the island's cochineal insect, which is used in the textile and cosmetic industries.

Then, you'll visit the César Manrique Foundation, Manrique's former house and studio. Erected on top of a volcanic trail, the home's interior was built around five volcanic bubbles. The Foundation is located inside the artist's house and works for the conservation, research and promotion of Manrique's work.

Your last stop is El Castillo de San Jose. Built in the 18th century to defend the island against pirate attacks, Manrique renovated the castle in 1975 and today it holds the International Museum of Contemporary of Art.

Return to port along the same scenic route with a better appreciation of the acclaimed artist and his contributions to Lanzarote.

Guests should note that the visit to Jameos del Agua requires negotiating many uneven stone steps at the entrance (uneven steps and uneven surface are in the whole Jameos). The steps may be slippery.

Depart from ship and drive to Jameos del Agua

Drive to San Jose Castle for a guided visit