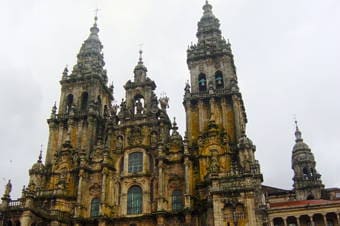 Your journey begins once you arrive via air-conditioned motorcoach after a scenic narrated drive from the Spanish port city of La Coruña.

From the 9th to the 16th centuries, Santiago de Compostela was an important center of pilgrimage. Up to two million Catholics came every year from all over Europe. They walked the Way of Saint James wearing a uniform of heavy cape, long stave, sandals and a felt hat with the scallop-shell emblem of St James. They stayed in hospices run by monks and were protected by Knights Templar of the Spanish Order of the Red Sword. Pilgrims still travel the Camino de Santiago, a UNESCO World Heritage Site, and thousands come on July 25th to celebrate the feast day of St. James the Apostle, the patron saint of Spain. Coming upon the monumental Plaza Obradoiro, you'll be enthralled by the sight of the massive cathedral, the undisputed centerpiece of Santiago. The spectacular Baroque facade of the cathedral is flanked by huge bell towers and is adorned with elegantly carved statues of St. James.

Up a magnificent quadruple flight of steps flanked by statues of David and Solomon, you'll enter the church through fine wrought-iron gates. Marvel at the Romanesque chapel, the Lower Church, and the impressive 18th century two organs at the central nave, that underline the verticality of the Cathedral with their pyramidal design. Contrasting with the Baroque facade, the cathedral's interior is Early Romanesque, with a cruciform shape, barrel-vaulted ceilings, two side aisles along the nave, and numerous chapels.

The architectural style of the altar is an impressive blend of Gothic simplicity and 18th century Churrigueresque (Spanish baroque) exuberance. A bejeweled medieval statue of the saint stands at the altar, which pilgrims greet with a hug upon arrival at the shrine. The sacred relics of St. James lie beneath the cathedral's high altar in a silver coffer and can be viewed from the crypt. In the Chapel of the Reliquary is a gold crucifix, dated 874, containing a piece of the True Cross of Christ.

After fully exploring the squares of Obradoiro and Platerías and its monuments, seeing the Palace Rajoy parliament building and the Hotel Parador Santiago de Compostela, the oldest hotel in the world, and hopefully an appreciation for the religious relevance you experienced, you'll rejoin your motorcoach for the scenic drive back to the pier and your ship in La Coruña.

The drive between La Coruña and Santiago de Compostela is approximately one hour each way, subject to traffic conditions.

On Sundays, most stores close and shopping will be limited.

Modest dress is required inside the Cathedral.

During Mass services, visits and photography are not permitted.

Tour guides will provide commentary outside of the Cathedral, in the interior the visit will be non-guided. Passengers will be given free time to visit the interior independently.

Restoration work will be taking place inside St. James Cathedral through 2020