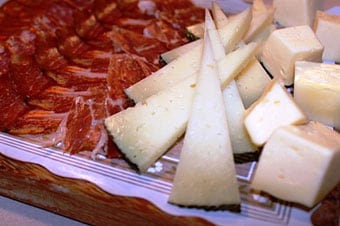 Lace up your walking shoes and say "hola" to fellow foodies as you embark on a guided culinary adventure that showcases the sights, sounds and tastes of La Coruna, the region's second-largest city. You'll stroll, taking in the architecture and history of this beautiful city with a special focus on its gastronomic heritage.

Join your guide and start your tour, passing by the lovely Méndez Núnez Gardens, which has been perfuming the air for over 150 years with exotic blooms, greenery and a promenade of shady palm trees. Look for the statue of John Lennon, dedicated to his commitment to peace.

Your first destination is the bustling Plaza de Lugo, a colorful marketplace that is brimming with produce and fresh seafood and has supplied the homes of La Coruna with fresh products since 1910. The Spanish markets are the pulse of the city's neighborhoods. Together with your knowledgeable guide, explore the different stalls and learn the culinary secrets of Galicia from the vendors.

Get ready for your next stops, two different tapas bars. "Tapas," which translates to "cover," originated in Andalusia, in the southern province of Spain. It began simply as a single piece of ham served atop a wine glass and grew to encompass any number of small bite-size snacks served between lunch and dinner. Various legends surround the origins of tapas: one popular tale has King Alfonso XIII stopping at a beachside tavern in the Andalusian city of Cadiz, where a waiter used the ham to protect the king's wine from blowing sand. Another legend says that, when Spanish King Alfonso X the Wise was ill, he was told to take small bites of food and wine between meals for sustenance, and when he recovered, he decreed that no inn could serve wine without little bites of food as an accompaniment. Today, the tradition continues in tapas bars, where sharing is encouraged and conversations are easily started over food.

Delight your palate with such nibbles as savory Padrón peppers, Spanish omelets, calamari, Galician empanada, serrano ham and Galician cheese, accompanied by a glass of locally produced wine, beer or a soft drink.

Refreshed, wander into grand Maria Pita Square, La Coruna's main city plaza, with the ornate facades of historic government buildings on all four sides. The square is at the heart of the modern city but is also a symbol of its historic past. At a charming terrace café overlooking the action, you can take in local color while savoring an aromatic cup of coffee or tea, followed by a tasting of Galician liquors. The liquors produced in this region are of equal importance to the wines, and the regional government regulates every aspect of production to ensure quality and excellence. Traditional Galician orujo (white spirit) is the most popular, but other liquors may be infused with herbs, cream or coffee for a rich, silky flavor.

At the conclusion of your delicious day, join your guide for the short walk back to port or opt to explore the sights independently before making your own way back to the ship.

This tour involves approximately 2 1/4 hours of walking and standing. Thus, it is not recommended for those passengers with mobility issues. Comfortable, flat shoes are recommended. Limited seating available at the tapas bars.This tour is not operational on Sundays (market closed). On Mondays, market will not be as bustling as usual due to the low fishing activity during the weekend.

Opportunity to try Padron peppers, Spanish omelette and calamari, accompanied by a glass of local wine or beer.

Second tapas stop at the typical "La Leonesa" bar. Enjoy an array of different Spanish sausages, assosrted cheeses and tuna empanada (Galician salty pie) together with a glass of wine/beer.

Last stop to enjoy a well-deserved cup of coffee or tea along with a shot of a Galician liquor and almond cake. Option to stay at Plaza de María Pita Square and then make own way back to ship