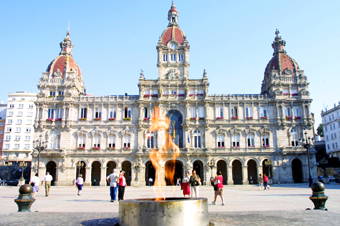 Explore the enchanting Spanish city of La Coruna. It's nestled within the vast green landscape of Galicia along the sparkling shores of the Bay of Biscay. Here you'll find a colorful heritage of Celtic and Roman influences, stately plazas lined with lavish 100-year-old municipal buildings and verdant environs brimming with fabled landmarks including the oldest working lighthouse in Europe.

Begin your explorations at the pier where you'll meet your guide and board a comfortable, air-conditioned motorcoach. Arriving at the renowned Plaza Maria Pita, you'll be struck at once by the imposing beauty of a collection of monumental municipal buildings. They rise above long colonnaded archways to tower over the square in a shimmering display of richly decorated domes. You'll feel as though you are being welcomed into a royal court, an impression that is only enhanced by the regal presence of the massive Town Hall and the equally imposing Palacio Municipal.

As you take in your surroundings, your guide will undoubtedly fill you in on the deeds of the town's heroine, Maria Pita. She became immortal while helping to defend the city against the English forces of Sir Francis Drake. When her husband, an army captain, was killed by a crossbow bolt to the head, Maria killed an attacking solder and then appeared on the heights of the defense walls shouting "Whoever has honor, follow me!" Inspired by her courage, the city's defenders drove back the English who then gave up the assault and retreated to their ships.

In the Old Town, you'll find remnants of the old Roman wall that once enclosed and protected La Coruna plus a number of nice Romanesque churches. The Church of Santiago, built in the 12th century to house a statue of St. James; the Church of Santa Maria del Campo crowning the highest point in the city; and the convent of Santo Domingo provide a glimpse of the past. The quarter also features an imposing military museum, the gracious Constitutional Square, the homes of two famous writers, and the tomb of General Sir John Moore, who was most famous for military reform and his defeat of the French army during the Peninsula War, within the lush vegetation of the Garden of San Carlos.

After this guided walk through the Old City, seeing among others - the spacious tree-lined Plaza Azcarraga, once the most important square in the old city, you'll re-board your motorcoach for the scenic drive along the coastline to view the imposing Castle of San Antón, which houses the Archaeological Museum. This Museum displays Celtic jewellery, Roman pottery, a Viking leather boat, 18th furniture and religious articles, among others. A photo stop at the fabled Tower of Hercules reveals not only this imposing structure standing sentinel at the entrance to La Coruna's harbor but panoramic views of La Coruna's beautiful setting. Soak it all in capturing priceless photographs to share with friends and family back home.

Then continue your drive to the lovely San Pedro Viewpoint where you'll stop for an array of traditional Galician tapas while enjoying the stunning views overlooking the Tower of Hércules, Atlantic Ocean and La Coruña City. After this relaxing break, this moderate, half-day tour concludes back at the pier.

On Mondays, as Castillo de St. Anton Archaeological Museum is closed. Thus, tour will run at a more leisurely/slower pace, with more extra time at the Tower of Hercules (photo stop) and refreshment stop.

In some cases, the tour itinerary may be altered or operated in reversed order.

Panoramic drive passing Museum of Mankind, Orzan and Raizor Beaches, and Millinium Monument on the way to your refreshment stop

Re-board your motorcoach and return to your ship.