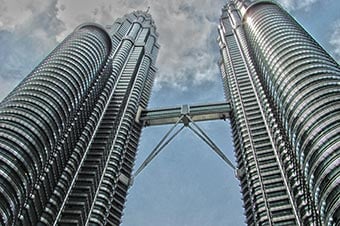 As the newest capital in Southeast Asia, Kuala Lumpur is rapidly gaining attention as a thriving, cosmopolitan city. But while it has its eye on the future, Kuala Lumpur also showcases its rich colonial heritage.

This excursion begins when you board your air-conditioned motorcoach for the approximate 90-minute drive to Kuala Lumpur. Along the way, you'll have a front row seat to many of the 21st-century industrial centers that dot the area. Be sure to bring your camera and comfortable walking shoes; not only will you visit some of the city's most renowned landmarks but you'll also have time to shop in one of Kuala Lumpur's leading shopping centers before returning to the ship.

Your first stop of the day is the National Monument. This stately memorial commemorates the soldiers who died during World War II and the Communist Insurgency War. Standing 49 feet tall, the bronze sculpture depicts seven soldiers symbolizing the seven qualities of leadership. Next, you'll travel into the heart of the city to Merdeka Square, also known as Independence Square. Here, you'll have a sense of Kuala Lumpur's bygone colonial era. Once the site of cricket matches and parades, today Independence Square is a sprawling grassy field, home to the Royal Selangor Club, the National History Museum, St. Mary's Cathedral, and the impressive Moorish-style Sultan Abdul Samad Building.

You'll then proceed to Kuala Lumpur's iconic Petronas Twin Towers. Soaring 1,483 feet into the sky, the towers are united by a Skybridge that rises 557 feet above street level, making it the tallest Skybridge in the world. The majestic steel and glass towers look very 21st century but their design is based in ancient Islamic tradition - the 241-foot tall spires, which sit atop the towers are reminiscent of the minarets that adorn mosques. A number of businesses occupy the upper tower levels, but the ground floor features upscale retail stores, an art gallery, a theater, an aquarium and a science center. Your final stop of the day is the Kuala Lumpur's leading shopping center where you'll have two full hours to shop at your leisure. Stretched over 1.4 million square feet, here you'll find 450 outlets offering something for everyone - have lunch in one of the many restaurants, shop in the fashionable boutiques, have fun in the entertainment centers, sit down for cup of coffee in a coffeehouse, work out in a fitness center or unwind in a spa.

Eventually, with the memories you've made on this magical day in mind, you'll rejoin your group at the predetermined time for a relaxing scenic return trip back to port.

It is approximately a 90-minute drive from Port Kelang to Kuala Lumpur.

Skybridge tickets are limited and are purchased in advance. No cancellations or refunds 30 days prior to cruise. Skybridge tour is limited to 20 persons per group.

Skybridge closed on every Monday, Public Holidays & Fridays between 1:00pm & 2:30pm for Muslim prayer (venue is visited before or after prayer session on Fridays).

The weather is hot and humid. Comfortable walking shoes, light clothing and a hat is recommended.

Depart from ship for visit to National Monument

Photo stop of the Merdeka Square and Royal Selangor Club