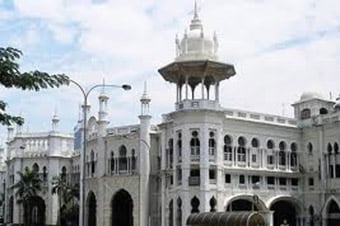 Explore both Kuala Lumpur and Putrajaya on this exciting half-day tour with lunch that features both Malaysia's cosmopolitan, multicultural capital, Kuala Lumpur, and the newer governmental center of the country, Putrajaya, designed to integrate modern infrastructure in a natural landscape.

Upon arriving in Kuala Lumpur, begin with a look at the fascinating history of this thriving, growing metropolis. The impressive National Mosque of Malaysia honors an ancient religion with modern architecture. Built in 1965, shortly after Malaysia's declaration of independence, its 73-meter minaret and "blue umbrella" roof are distinctive and impressive. One of the largest mosques in Asia, it is situated among 13 acres of gardens, reflecting pools and fountains.

After strolling through the mosque grounds, walk over to the Old Railway Station, a Moorish-style structure that contains a small museum dedicated to the history of Malaysian railways. And be sure to stop at Independence Square, or Dataran Merdeka, where the Malaysian flag was raised for the first time in this newly independent country in 1957. The square is used for the annual Merdeka Parade, celebrating this event.

Located just south of Kuala Lumpur, Putrajaya was developed in the early 1990s and became the new administrative center of Malaysia in 1999. The vision for this unusual city was for it to be both a "garden city" – where more than a third of the land is reserved for green spaces – and an "intelligent city", with a high-speed rail link and modern technology built into its infrastructure. It is a showcase for the harmonious integration of technology and nature and is still evolving and growing.

Putrajaya has many notable architectural structures, including the International Convention Center, whose futuristic design makes it look like it might take off into outer space! The city's numerous bridges also feature unique designs: Seri Wawasan Bridge's modern cables have the appearance of an enormous sail; Sri Perdana Bridge, with a Royal Islamic design, has balconies for pedestrians to appreciate the view; and Putra Bridge incorporates fine-dining restaurants within its pillars. Putra Mosque, one of the most modern in the world, perches grandly on the waterfront of an enormous man-made lake, adjacent to Perdana Putra, which houses the prime minister's office.

After you've filled your camera with the incredible sights of Putrajaya, re-board your motorcoach for the relaxing ride back to port.