City Highlights & Time On Your Own 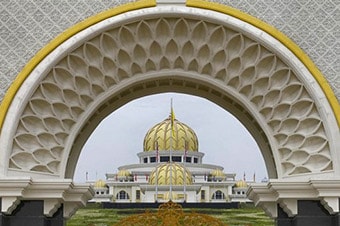 With an enjoyable mix of sightseeing and free time, this comprehensive tour offers something for everyone. The day begins when you board your comfortable motorcoach for a scenic ride from port to Kuala Lumpur, Malaysia's cosmopolitan, multicultural capital, which locals simply call "KL." This modern city is one of the fastest-growing metropolitan areas in the world, and you will see why as you pass some of the ongoing infrastructure and commercial development on your way into the city.

First, stop for a dazzling photo opportunity at the new King's Palace - the Istana Negara. Opened in 2011, this new palace complex covers over 97 acres and houses the current king, the 14th Yang di-Pertuan Agong (head of state). Tuanku Abdul Halim Mu'adzam Shah is currently serving his second term as king - the only ruler to have done so. His first term ran from 1970 to 1975, and his second began in 2011.

From here, your next stop is the National Monument, a dramatic sculpture of soldiers holding up the Malaysian flag - inspired by Virginia's Iwo Jima Memorial and located near the Malaysian Houses of Parliament. The monument commemorates those who died during the Japanese occupation amid World War II and throughout the Malayan Emergency, and an episode in the 1950s when the colonial government fought against a communist insurgency.

A short drive will next take you pass the Moorish-style architecture of the Old Railway Station and the extraordinary National Mosque. Built in 1965, the modern mosque's 73-meter minaret and "blue umbrella" roof - situated among 13 acres of gardens, reflecting pools and fountains - are distinctive and impressive.

A brief photo stop at Independence Square will offer you the perfect opportunity to take snapshots not only of the square, where the Malaysian flag was raised for the first time in this newly independent country in 1957, but also of the many buildings of historical interest that surround it. Known locally as Dataran Merdeka, the square is used for the annual Merdeka Parade, celebrating Malaysia's independence.

Next, stop to marvel at the city's iconic Petronas Twin Towers, a pair of postmodern stunners that held the title for the tallest buildings in the world for six years, until they were displaced in 2004. At the base of the towers is Suria KLCC, the premier shopping center in all of Malaysia, which features such international luxury shops as Chanel, Coach, Armani and Gucci. There are also restaurants, a cinema, a concert hall, an art gallery - and world-class people-watching! You will be able to enjoy two hours of free time to browse and nibble your way through Suria KLCC before rejoining your motorcoach for the relaxing ride back to port.

It is an approximately 90-minute drive from Port Kelang to Kuala Lumpur.