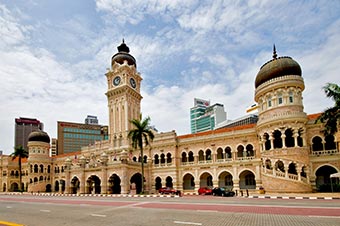 Your journey begins as you board your motorcoach for an all day tour to some of Kuala Lumpur's most fascinating and colorful sights. You'll pass by industrials and commercial developments, small townships and the impressive expressway developments before arriving to your first destination - the KL Tower. Rising over 1,381 feet the telecommunications and broadcasting tower also houses shops, restaurants, an open-air amphitheater, and a mini-theater that shows a documentary on the tower's construction. A walk ride up to the observation deck rewards you with stunning views of the city.

Next, is a visit to the National Museum. The museum is a palatial structure built in the style of Rumah Gadang, an aspect of Minangkabau architecture. Its facade comprises elements of traditional Malay and modern features. The various galleries, exhibits and displays inside reflect the country's rich history, culture and traditions from the Stone Age to its colonial days under British rule to Malaysia's eventual independence. An impressive collection of royal headgear of Malay rulers, and a recreation of a Malay home furnished with exquisite antiques are just two of the many exhibits on display.

Throughout the day, you'll have the opportunity for plenty of photo stops including the National Mosque, built in 1965 in honor of Malaysia gaining independence from Great Britain without any bloodshed in 1957, the key feature is the 73-metre-high minaret and a 16-pointed star concrete main roof. You'll also visit Merdeka Square. Also known as Independence Square, this historical area is home to the Royal Selangor Club and site of the August 31, 1957 proclamation declaring Malaysia's independence from Britain), the Railway Station, a superb example of Moorish-inspired colonial architecture built in the early 20th century and the National Monument commemorating Malaysia's heroes of World War II.

A buffet lunch at a local, leading hotel in Kuala Lumpur is next.

Later, you'll re-board your motorcoach and head for the Karyaneka Handicraft Center to shop for pewter, crystal, glass, textiles and more or watch a batik painting demonstration.

Your tour concludes with a ride through the same scenic route back to your ship.

It is an approximately 90-minute drive from Port Kelang to Kuala Lumpur.

The weather is hot and humid. Comfortable walking shoes, light clothing and a hat is recommended.

Depart from ship for Inside visit of the National Museum

Stop at the National Monument

Photo stop of the Railway Station

Photo stop of the Merdeka Square and Royal Selangor Club

Buffet lunch at a restaurant

Free time for shopping at the Karyaneka Handicrafts Center

Visit the Observation Deck at the KL Tower