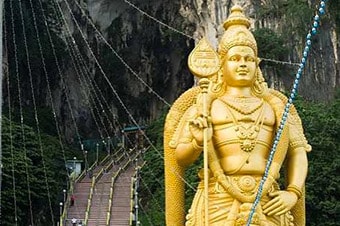 Kuala Lumpur's reputation as a modern city is evident in its sky-scraping architecture, bustling streets and shopping centers. Sophisticated it may be, Kuala Lumpur also embraces its revered past. During your all-day adventure you'll have the opportunity to experience both sides of the city. Be sure to wear a hat and light clothing, and since you'll be doing a lot of walking and climbing steep stairs be sure to wear comfortable shoes; and don't forget to bring a camera to capture all the memorable sights.

The journey begins as soon as you board your air-conditioned motorcoach for the approximate 90-minute drive to Kuala Lumpur. Along the way, you'll have a front row seat to many of the 21st century industrial centers that dot the area. You'll continue traveling north of the city through its large suburban area, home to the National Zoo and your first stop - the spellbinding Batu Caves.

Rising almost 328 feet above ground, the Batu Caves is actually a complex of 400 million-year-old limestone caverns. Since their discovery in 1891, Hindu devotees have filled the caves with colorful Hindu shrines; today, the complex is considered to be one of the most popular Hindu shrines outside of India. When you step off the motorcoach, don't be surprised to be greeted by a long tailed macaque monkey or two. The next sight you'll see is the 141-foot tall gilded statue of the deity Lord Murugan standing guard over the 272 steps that lead to Cathedral Cave, the grandest of all the caves. After climbing the flight of stairs (don't worry, there are many places to stop to catch your breath and to take in the views), you'll be rewarded with a majestic cavern with a 300-foot high ceiling. Inside, you'll find ornate Hindu shrines and a statue of Rama sitting in the back.

Once you climb back down, you'll reboard your coach and head into Kuala Lumpur for a visit to the Royal Selangor Visitor Center to watch skilled craftsmen create beautiful items out of pewter. Founded in 1885, Royal Selangor is noted for its innovative designs and high quality and during the factory tour you'll see all the intricate handwork involved. Next on the agenda is a delicious buffet lunch of Malaysian favorites at a local restaurant. After lunch, you'll continue on to your final stop, the National Museum. Built to resemble a grand Malay palace, the museum's exterior is adorned with murals depicting scenes from the country's past. Inside, you'll find several galleries, each showcasing Malaysia's history and culture from its colonial days to its struggle for independence.

At the end of the day you'll drive back to port with a warm appreciation of KL's many past and present delights.

It is an approximately 90-minute drive from Port Kelang to Kuala Lumpur.
For Ladies - short and mini-shirts are not allowed.
At Batu Caves, monkeys can be cheeky opportunists and regularly mug tourists for food, they will usually back off if you stand your ground. Do not feed these mischievous monkeys.

Suitable only for the fit and healthy as it involves climbing up the 272 steps.

Depart from ship for visit to Batu Caves