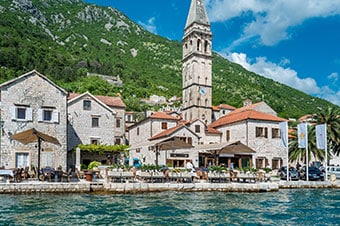 What you will visit:
Kotor
Nestled on the coast of Montenegro, beautiful Kotor, with a magnificently preserved old city built over the 13th and 14th centuries, showcases exceptional medieval architecture within its Venetian stone walls. Cobblestone streets wind through this UNESCO World Heritage Site, which boasts the St. Tryphon Cathedral built in 1166, atmospheric marketplaces, sunny cafes and grand palaces built by the mercantile families of the city's past – all surrounded by stunning views and overlooking the sparkling bay.

Maritime Museum
Located at the Square of Boka Marine, this comprehensive three-story museum is housed in the 17th-century Grgurina Palace. The ground level introduces visitors to the significant moments and historic personalities in Kotor's history. The second and third levels display a fine collection of naval artifacts, weaponry and ship models chronicling Kotor's glory days as one of the Adriatic's major naval forces. The collection was started by the Boka Marine Fraternity in 1880, and the museum was opened to the public in 1900. It features memorabilia, photographs and reconstructed drawing rooms from local noble families. Audio guides enhance the experience.

Perast
One of the most well preserved baroque cities in Montenegro, Perast flourished during the 18th century, when it had four busy shipyards and a fleet of 100 ships. The old city, including the Bujovic Palace, boasts nine defensive towers, which were built by the Venetian navy in the 15th and 16th centuries. Narrow streets are lined with charming baroque manor houses, built by Perast's merchant captains, many of which are now heritage sites.

Our Lady of the Rock
Legend tells that local seamen who swore an ancient oath created this island and that after each successful voyage, returning sailors would place a rock in the bay until the islet emerged from the sea. This tiny man-made island and graceful church, the protector of seafarers, contains 68 magnificent paintings by Tripo Kokolja, a famous 17th-century artist from nearby Perast. His most famous painting, The Death of the Virgin, is housed here and measures some 33 feet in length. You'll also view paintings by Italian artists, along with the classic, mid­15th­century masterpiece Our Lady of the Rocks, by Lovro Dobricevic of Kotor. There are over 200 silver coins displayed on the church walls, donated treasures made by sailors when they returned from sea battles.
What you will see along the way:
Spectacular views can be found en route to Perast. The boat motors across the deep blue waters of Boka Bay, which is surrounded by dramatic high cliffs and a picturesque shoreline.

Lunch:
A delightful lunch is served in a local restaurant in Perast. The menu includes both seafood and meat options as well as cake and fruit for dessert.

Boat ride to Our Lady of the Rock

Sightseeing of the Our Lady of the Rock

Boat ride back to Perast

Return back to ship