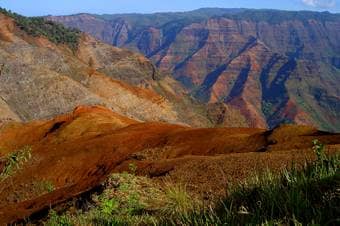 Ancient Hawaiians believed the loud groan emitted by the lava-tube blow hole known as Spouting Horn was the voice of the angry goddess Kaikapu. Legend has it that this coast was once guarded by a large mo'o, or lizard, whom ate everyone who tried to fish or swim here.

One day, a man named Liko entered the water. When the mo'o went to attack him, he swam under the lava shelf and escaped through the hole. The mo'o became stuck and was never able to get out. The groaning is the cry of hunger and pain from the lizard that is still trapped under the rocks.

There used to be a much larger blowhole called Kukuiula Seaplume adjacent to Spouting Horn. It shot water 200-feet into the air. However, as the salt spray damaged a nearby field of sugar cane, the hole was blasted away in the 1920's.

Thankfully, Spouting Horn remains and when the tide is right, waves surge through the submerged lava tube and erupt in a spectacular geyser of sea water, treating visitors to a stunning show.

Another highlight of Kauai's extraordinary topography is Waimea Canyon. The largest canyon in the Pacific, it is an astounding sight. Ten miles long, 1 mile wide and 3,500-feet deep, it was carved thousands of years ago by rivers and floods flowing from the summit of Mount Waialeale.

The lines in the canyon walls depict different volcanic eruptions and lava flows that have occurred over the centuries. Though smaller than the Grand Canyon of Arizona, Waimea Canyon rivals its more famous counterpart in scenic beauty.

Lookouts offer terrific views of every aspect of this natural wonder. The canyon is protected by the Koke'e State Park which encompasses 4,345 acres of land and has 45 miles of trails that run through the canyon and the nearby Alakai Swamp. The elevation makes the air 10-15 degrees cooler than in the valley and by afternoon many areas are often shrouded in clouds.

During the course of this moderately active half-day excursion, you'll also take in unforgettable sights through your motorcoach window. During the approximately two hour journey to the canyon, you'll pass through Lihue, the island's main town; Koloa, where the islands first successful sugar plantation was started, as well as the small villages of Oma'o, Kalaheo and Hanapepe.

Depart from ship for a visit to Waimea Canyon