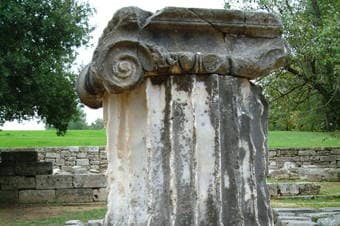 Your tour begins as you board your motorcoach at the harbor bustling with brightly painted fishing boats, and drive 30 minutes towards the gateway to Olympia. Along the way, you'll pass the modern region of Pyrgos and travel through the countryside between the Alfios and Klados Rivers.

Your first destination is the ancient Olympia Archaeological Site. With your guide by your side, you'll set off on a walking tour of the chief ruins. You'll view the Temple of Zeus, where a gold and ivory statue of the god once stood. Although just a chaotic heap of ruins today, the dimensions of the temple are truly impressive. Only a bit smaller than the Parthenon in Athens, it was a classic temple in the Doric style, first built in the 5th century B.C.

The statue, considered one of the Seven Wonders of the World, was crafted by the great sculptor Pheidias. The original was 44 feet high and lavishly decorated with Zeus on a throne of ivory and gold, holding a statue of Nike in his right hand, and a scepter with an eagle in his left.

You'll also see the Heraion or Temple of Hera, wife of Zeus, and the ruins of the great Stadium, its marble starting blocks still standing in position. Here's where more than 40,000 spectators would fill the stadium to witness contests ranging from foot races to the pentathlon, and after nearly 1,500 years, the 2004 Olympic Games held the shot-put contest.

Minutes away, you'll enter the Olympian Archaeological Museum. Artifacts from the sanctuary of Olympian Zeus, unearthed in over a century of excavation, are on display. You'll view two rich pediments from the Temple of Zeus, the long triangular groups that appeared just below the peaked roof, depicting scenes commemorating Pelops' chariot race and illustrating the mythical war between the Centaurs and the Lapiths. Also on display are Hermes of Praxiteles, the Winged Victory of Palonios - the figure inscribed on all the 2004 Olympic medals - and a helmet inscribed "Militiades," the name of the commander whose forces defeated the Persians at Marathon.

Your tour concludes with a walk back to your motorcoach, and a scenic drive back to the harbor. With Katakolon behind you, you leave with a myriad of unforgettable memories of a lifetime.

In order to protect the historic environment, local regulations require motorcoaches to park approximately 1,200 yards from the exit of the Olympia site. The tour also involves extensive walking over gravel and uneven paths. Depending on parking, passengers may be asked to cross a bridge with 25 steps in order to reach the Archeological Museum. Wear comfortable walking shoes. Passengers with limited mobility should take this into consideration.

Flash photography is not allowed in the museum.

Depart from ship for guided tour of the Olympia Archaeological Site