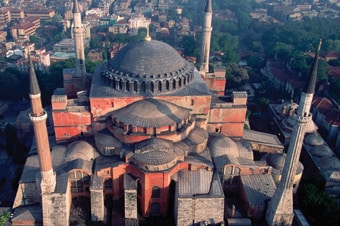 A scenic 25-minute drive in your motorcoach takes you across the Galata Bridge into the heart of Istanbul, the largest city in Turkey and the capital of the Ottoman Empire.

Prepare for an up-close-and-personal view of Istanbul as you walk to the Blue Mosque, also known as The Sultan Ahmed Mosque. This 17th-century marvel was built to rival and surpass the grandeur and beauty of nearby Hagia Sophia, and is a true study in color. It displays a multitude of domes and semi-domes and graceful minarets on the exterior, and over 20,000 shimmering blue Iznik tiles in more than 50 different tulip designs, and 216 stained glass windows, on the interior.

Just a short walk away, Hagia Sophia comes into view. Also known as St. Sophia, the Church of Holy Wisdom, it was originally built by Constantine the Great, and later rebuilt by Emperor Justinian to be a "queen church" of the new empire. Considered one of the greatest surviving examples of Byzantine architecture, it's rich with mosaics and marble pillars and coverings.

A short drive away, you'll witness the lively Grand Bazaar and its animated transactions. Your tour continues to this impressive covered market - the largest in the world with over 4.000 shops. You'll view a carpet demonstration and explore the shops filled with jewelry, carpets, leather ware, and copper goods. Bargaining is expected and half the fun.

Your tour concludes with a walk back to your motorcoach, and a relaxing drive back to the port. With Istanbul behind you, you leave with a myriad of unforgettable memories of a lifetime.

Attire for visiting the mosque should cover shoulders and knees; shoes must be removed before entering; bring or wear socks. Shoe bags will be provided. In addition to covering shoulders and knees, all women must cover their head with a scarf. Professional photography and flash are not allowed.

The sequence of tour stops may vary; expect extreme dense traffic. Once in Old Istanbul, passengers will walk between the major sites.

On Friday calls; Blue Mosque visit will be substituted with a historical Ottoman Mosque.

Depart from ship for a guided tour of the Blue Mosque

Shopping at the Grand Bazaar