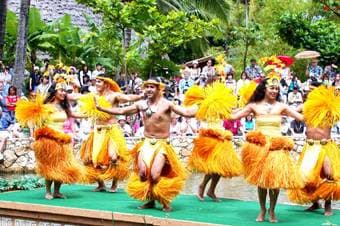 Immerse yourself in Polynesian culture on this full-day excursion. Your adventure begins at the pier where you will board an air conditioned motorcoach for a 90-minute scenic drive through the breathtaking landscape toward Oahu's lush windward side.

En route, glimpse the lifestyle of the Hawaiian monarchy of a bygone era when you drive by Queen Emma's Summer Palace, the beautifully restored Hawaiian-Victorian summer retreat of the wife of King Kamehameha IV.

Travel a narrow road that winds through lush tropical forest growing on stratified cliffs on your way to the Pali Lookout in the rugged Ko'olau Mountains. This stunning lookout with awe-inspiring vistas of the island is rumored to be the site of a bloody battle in 1795 in which King Kamehameha I forced thousands of his opponents to jump to their deaths from the cliffs there.

Continue by local highway along the pineapple plantations of Wahiawa to the Dole Pineapple Pavilion. Originally operated as a fruit stand beginning in 1950, Dole Plantation opened to the public as Hawaii's "Pineapple Experience" in 1989. Today, it is one of Oahu's most popular visitor attractions featuring a garden and exhibits on the history of the pineapple in Hawaii.

Head for the north shore, home of Oahu's famous surfing beaches such as Pipeline, Sunset Beach and of course Waimea Bay. As you journey you will pass the island's famous Mormon Temple built in 1919.

Disembark at the Polynesian Cultural Center. Located near the village of Laie and founded by Mormon missionaries in 1864, the center preserves the cultures and customs of old Polynesia, from Hawaii to Tonga and Samoa.

Upon your arrival to the 42-acre center, Polynesian villagers (students from nearby Laie campus of the Brigham Young University) will greet you. As you stroll the center you'll find seven different authentic island settings with dozens of fun-filled and informative demonstrations such as Tongan drumming, fire making, coconut tree climbing and traditional dances of Fiji, Hawaii, the Marquesas, New Zealand, Samoa, Tahiti and Tonga.

As the Pageant of Long Canoes floats the waterways of the center regaling you with songs and pageantry of Polynesia, enjoy a complimentary island-style BBQ buffet lunch featuring delicious dishes.

Following your fascinating day of Polynesian culture, a scenic return drive will take you past the famous Mokolii Island popularly known as Chinaman's Hat because of its unique conical shape resembling the straw coolie hats used by immigrant workers.

This tour is not available for pre-reserve on voyages beginning or ending in Honolulu.

This tour is not available on Sundays or holidays when the Polynesian Cultural Center is closed.

This tour does not operate on voyages departing Honolulu before 6:00pm. Shopping and photo stops are not featured on voyages with arrival times in Honolulu after 8:30am.

Depart from ship for scenic drive to Pali Lookout

Inside visit to Dole Pineapple Pavilion

Photo stop at the island's famous Mormon Temple built in 1919