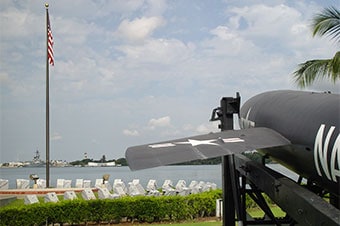 Designed for the history and military buff, this full-day excursion offers a first-hand look at Honolulu's intriguing past and present.

After boarding your air-conditioned coach you'll travel to Pearl Harbor. Named for the pearl oysters once harvested in the bay, Pearl Harbor is Hawaii's largest natural harbor and the only naval base in the United States to be designated a National Historical Landmark. It's also where, on December 7, 1941 a 1,760-lb. bomb hit the USS Arizona, prompting the United States to enter the Second World War.

First on your itinerary is a visit to the Pearl Harbor Visitor Center. Once you disembark you'll enter the Road to War Exhibit where you'll get to know the people and the events that led up to the attack with dramatic multimedia re-enactments; intricately designed replicas of historic aircraft carriers, battleships and airplanes; displays of rare artifacts and tactical films; and personal stories and experiences of Pearl Harbor survivors. Inside the Attack Exhibit you'll find a Japanese torpedo bomber, exhibits of the wreckage of the Arizona and a detailed scale model of the USS Arizona as she is today lying on the bottom of Pearl Harbor. After a self-guided tour of the grounds that includes the Contemplation and Remembrance Circles, and the anchor of the USS Arizona, you'll rejoin your coach for a tour of Hawaii's capital city.

Sit back and relax as you drive through Honolulu's bustling streets towards downtown and its authentic Chinatown district. Founded in 1789, the majority of Chinese immigrants arrived in 1852 to work on the island's sugar plantations. Today, it's a vibrant neighborhood full of colorful markets, antique dealers, temples, and 19th century buildings.

Further on, you'll journey past the majestic Iolani Palace, the only royal residence in the United States and a National Historic Landmark. Built by King Kalakaua between 1879 and 1882, the stunning four-story Italian Renaissance Palace was considered so far ahead of its time it had electricity before the White House and Buckingham Palace.

Next on your sightseeing tour is the impressive Kawaiahao Church, known as the "Westminster Abbey of the Pacific." Acclaimed as the first Christian church in Oahu, the building was built in 1842 with 14,000 slabs of coral from ocean reefs. As you drive behind the palace you'll observe the State Capitol Building, a unique work of architecture with cone-shaped chambers that symbolize Hawaii's volcanoes and building columns reminiscent of palm trees. Glimpse the King Kamehameha statue, which fronts Honolulu's old judicial building. The bronze statue is adorned with beautiful floral leis every June 11 on King Kamehameha Day.

Your day ends with a look at Honolulu's dramatic past and a drive through the Punchbowl National Cemetery, located inside the Puowaina crater. A sprawling 116 acres, the cemetery is the final resting place of over 35,000 who gave their lives in service of their country. Beyond and above the city you will make a stop at the Pali Lookout high in the Koolau mountain range for spectacular views of the windward side of Oahu.

Then, enjoy a contemplative ride back to port as you discuss with your fellow travelers the historic sites of the day.

Please note this tour does not include the visit to the Arizona Memorial and the documentary film. Guests may try to obtain a walk-in ticket to the Arizona Memorial, which are limited and available on a first-come, first-serve basis. The Arizona Memorial experience is 75-minutes long and your time at Pearl Harbor is 2.5 hours (all of which is free time). If you can secure tickets, it will have to work within the parameter of the allotted time as the bus must leave at the designated departure time and guests who do not make it back will have to find their own transportation back to the ship.

Tour Back to Pier