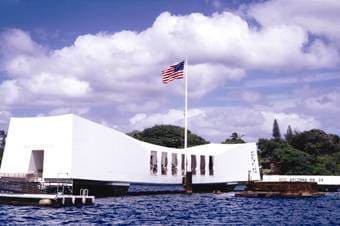 Pearl Harbor & USS Arizona Memorial
World War II began for the United States on Dec. 7, 1941, when Japanese fighter planes attacked the U.S. Base at Pearl Harbor. In one of the deadliest attacks in U.S. military history, over 2,400 people lost their lives and 20 American ships and 3,000 airplanes were damaged or destroyed. The naval battleship USS Arizona was hit four times by Japanese bombers and sustained the highest number of casualties. A Navy launch transports visitors to the USS Arizona Memorial, a 184-foot memorial that floats above the shattered hull of the sunken ship destroyed by Japanese bombs on that infamous day. Both beautiful and sobering, this visually striking memorial commemorates the 1,177 crewmen (75 were recovered, 1,102 remain entombed there) who were killed during the surprise attack.

Honolulu City Highlights
From the motorcoach, sit back and relax as views of Honolulu's most popular attractions and landmarks go by. See the Aloha Stadium, the downtown district, Chinatown, the Kawaiaha'o Church, City Hall, the State Capitol, the Governor's Mansion. Drive past the magnificent Iolani Palace, the only royal residence in the United States and a National Historic Landmark. Built by King Kalakaua between 1879 and 1882, the majestic four-story Italian Renaissance Palace was considered far ahead of its time - it had electricity before the White House and Buckingham Palace.

Pali Lookout
Nestled high in the Koolau mountain range, Pali Lookout is the perfect spot to capture breathtaking views of the windward side of Oahu.

Iolani Palace
Magnificent Iolani Palace is the only royal residence in the United States and a National Historic Landmark. Built by King Kalakaua between 1879 and 1882, the majestic four-story Italian Renaissance Palace was considered far ahead of its time – it had electricity before the White House and Buckingham Palace.

On rare occasions the Navy may discontinue motorlaunch service to the Arizona Memorial due to weather and safety concerns. If the launches to the Arizona Memorial are not operating, the visit to the Visitors Center will still be made to provide an opportunity to take pictures of the Memorial, attend the film in the Pearl Harbor Memorial Theater, visit the Exhibit Galleries as well as to tour Remembrance Circle and Submarine Memorial. For an additional cost, passengers may also choose to visit the USS Bowfin submarine.