Beyond the Call to Duty: Pearl Harbor Museums & Memorials 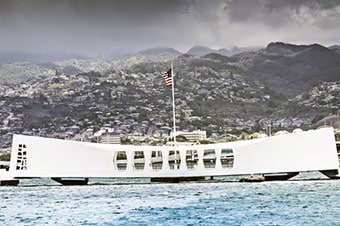 Revisit key historic moments from World War II – from Japan's surprise attack on Pearl Harbor to its surrender aboard the battleship USS Missouri – on a full-day tour that pays homage to Hawaii's central role in the events that reshaped history.
Your tour begins when you journey in a small, luxury minicoach along the Nimitz Highway. As you drive, listen to an informative WWII narration as well as tips and hints on making the most of your visit to the attractions. Arrive refreshed, and set off on a day of reflection and discovery with your intimate group and knowledgeable navigator. Bottled water will be provided.

Before leaving Pearl Harbor, visit the hangars of the Pearl Harbor Aviation Museum for a unique look at the aviation history of the United States. A documentary on the Pearl Harbor attack is narrated by pilots, a host of fighter planes including the Curtiss P-40E Warhawk are on display, and you will be intrigued by the fascinating exhibit on Amelia Earhart. Enjoy lunch at the museum.

Expect crowds when visiting the USS Arizona Memorial. On rare occasions the Navy may discontinue the motorlaunch service to the Arizona Memorial due to weather and safety concerns.