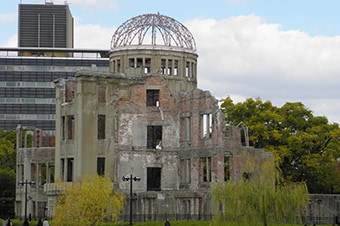 No visit to Hiroshima is complete without a visit to the Peace Memorial Park and Museum, a graphic reminder of that fateful day when the atomic bomb was unleashed on the city on August 6, 1945.

After boarding your motorcoach, it's a short drive over the Ôta River to the center of the city. Stretching out over 30 acres, the Park had been a thriving commercial center dating back to the 17th century. Established in 1955, the Peace Memorial Park and Museum stands as a moving tribute to the 70,000 citizens who lost their lives. Flocks of doves, a symbol of peace, are often seen flying around the park.

Once you step off the bus, you'll feel the serene silence in the air as you make your way to the Atomic Dome. Once known as the Hiroshima Prefectural Commercial Exhibition Hall for promoting goods produced in the province, the building was ravaged when the A-bomb exploded. You'll notice that bare, scorched steel sticks out from the roof but many of the walls still remain. Because the blast attacked the building from overhead, some walls escaped total collapse. Declared a UNESCO World Heritage Site, the Dome stands as the city's symbol in the pursuit of the abolition of nuclear weapons and enduring peace.

From here, you'll walk through the Peace Memorial Park, passing the Peace Clock Tower. Rising 65 feet into the air, the Tower is made of three iron pillars, which represent the hands of the people of Hiroshima united in deep prayer. Atop the Tower is the clock that chimes every day at 8:15, the exact time of the bombing. Nearby is the Peace Bell and a pond, which blooms with beautiful lotus flowers every August.

Further along sits the Children's Peace Monument, dedicated to the memory of a young girl named Sadako Sasaki who, after being exposed to the atomic radiation, died of leukemia a decade after the bombing. On the top of the three-legged pedestal stands the bronze figure of a girl holding a crane. On opposite sides of the pedestal are sculptures of a boy and a girl, which symbolizes a bright future and hope.

In the center of the Park is the Museum. Housed in two buildings, the East Building documents the city in a series of before and after models, photos, paintings, and documentaries. The Main Building is designated one of the important cultural assets of Japan. Inside, you'll find A-bomb artifacts and materials that explain the devastating effect intense heat rays and radiation had on the people of Hiroshima. You can also hear the somber testimonies of survivors, and are encouraged to write messages of peace.

At the end of the tour, you'll return to your motorcoach for the ride back to your ship.

Walk to Museum for visit