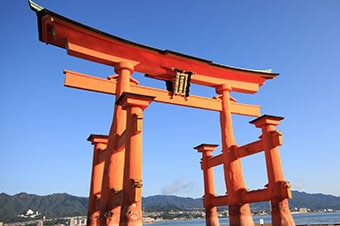 Start your full-day tour by delighting in the sights of one of Japan's most breathtaking sights. Known as one of the three most scenic places in Japan since the 17th century, Miyajima is a beautiful island in the Inland Sea. A UNESCO World Heritage Site, Miyajima has a 1,400-year-old history as a holy site of Shinto, an ancient Japanese religion that means "way of the gods." And beginning in the 6th century, it was believed that the gods lived on the island's highest peak, Mt. Misen.

Begin by boarding your motorcoach and travel to Miyajimaguchi where you'll board the ferry that will take you to the island. When you arrive on the island, it's a short walk to the stunning Itsukushima Shrine. As you approach this awesome site you'll notice that the shrine is located in a small inlet. Dedicated to the Shinto deities of seas, storms and sun, the shrine was built like a pier over the water giving the illusion that it's floating above the water. Dating back to 593 A.D., the pavilion was expanded in the 12th century by Taira no Kiyomori, a warlord who selected the island as the site of his family's shrine. Its architectural style is known as "shinden-zukuri," which was developed for palatial or aristocratic mansions during the Heian Period of the 8th and 12th centuries. The vermilion-painted main building is surrounded by an array of covered corridors and bridges.

Set out in the Seto Inland Sea in front of the shrine is the striking red torii. This traditional Japanese gate rises 52 feet above the water; its columns are made of camphor and measure 32 feet in diameter with support pillars buried deep in the seabed at high tide.

After your visit travel back on the ferry to Miyajimaguchi where you'll reboard your motorcoach for the short trip to lunch. After lunch stop near Miyajima, drive back to Hiroshima.

Upon arrival to the Hiroshima Peace Memorial Park, you'll see brightly-colored paper cranes everywhere. Origami or paper-folding is a traditional Japanese craft, but it has become a symbol of peace. Today, paper cranes are folded as a wish for peace in many countries around the world. This connection between paper cranes and world peace stems from a young girl named Sadako Sasaki, who died of leukemia as a result from the atomic bomb.

The monument in her honor is called the Children's Peace Monument. It was built with funds donated from people all over Japan. The story goes that Sadako was exposed at age two to the atomic bomb's radiation and thus developed leukemia at age 11. She hoped that folding paper cranes would help cure her, so she kept making paper cranes up until her death, eight months later, on October 25, 1955. Today, it is estimated that approximately 10 million cranes are brought to the Children's Peace Monument each year in the name of world peace.

Tour the Peace Memorial Museum. See exhibits, videos and items that survived the bombing. Learn about the scope of destruction and extent of the bombing zone. See haunting images of shadows etched into buildings and sidewalks.

You'll also view the Atomic Bomb Dome. The old Industry Promotion Hall was one of the few buildings near Ground Zero to survive the blast, although its dome was vaporized. Renamed, its gutted walls and skeletal dome structure stand as mute icons and powerful symbols of a weapon's destructive force. Hopefully, never to be used again.

From here, you'll head back to the pier. Relax and sit back as you reflect on a full day of events on your ride back to the ship.

Depart from ship to ferry to Miyajima Island

Ferry ride back to Miyajimaguchi

Lunch at the local restaurant