Helsinki Highlights & Time On Your Own 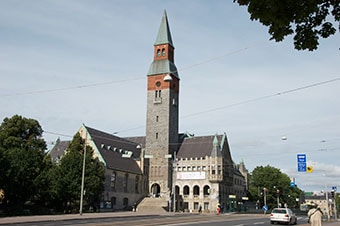 Tucked between Sweden and Russia, it should come as no surprise that they had quite an influence over Finland's largest city. And much of Helsinki's architecture bears a nod to these two powerhouse nations. Discover their impact on a three-hour guided tour that showcases some of the city's most beloved landmarks.

After boarding your coach you'll travel along the shoreline, which offers views of the Suomenlinna Fortress, Finland's largest fortification. Finland had already been a part of Sweden for 400 years by the time King Gustav I founded Helsinki in 1550 as a way to compete with Russia's expansion of its trade routes in the Baltic. War with Russia in the first half of the 18th century led to the construction of the Suomenlinna Fortress. Recognized as a UNESCO World Heritage Site as an "outstanding example" of military architecture, the imposing citadel stretches out over six islands.

Sit back and relax as your driver turns down Esplanadi, Helsinki's famous design street and home of the Presidential Palace. Originally built in 1820 for merchant and ship owner J. H. Heidenstrauch, the building served as an imperial palace for Russian emperors from 1837 to 1915.

Your first stop is at Senate Square, a center for arts, culture, religion, politics and education. Dominating the square is the Lutheran Cathedral, also known as Helsinki Cathedral. Built in 1852 as a tribute to the Grand Duke, Nicholas I, the Tsar of Russia, the cathedral's verdigris dome shines like a beacon over the city. On the southeast corner of the square you'll find the Sederholm House, Helsinki's oldest stone building.

From here you can walk to Market Square, Helsinki's most famous market. You'll have approximately 1 hour free time to browse the square's many handicraft and souvenir shops, sample a Finnish treat in a pastry shop or take photos before rejoining your coach and resuming your tour.

You'll then proceed to the spectacular Temppeliaukio Church, also known as the Church in the Rock. Outside, a large copper dome peeks out of the ground. Inside, you'll find a church built inside of a massive block of granite with natural light pouring in from 180 slabs of glass.

From here, it's off to the beautiful and exceptional Sibelius Monument in Sibelius Park. Made of welded steel to resemble organ pipes, the monument, dedicated to Jean Sibelius, Finland's most famous composer, stands over eight feet tall, 32 feet wide and weighs 24 tons.

Photos taken, you'll rejoin your coach and return to your ship. Or if you choose, you can return to the ship at your leisure.

Entry to the Rock Church may be denied due to religious functions. Order of site visits may vary.

Visit Temppeliaukio Rock Church, also known as the Church in the Rock.

Photo stop at the Sibelius Monument.

Return to the ship or stay in the city and return the ship at your leisure.