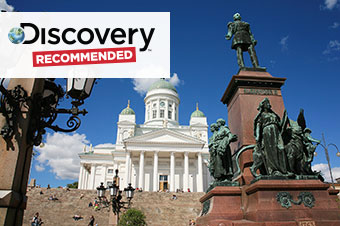 Beautiful Helsinki is the one of the most metropolitan and historic cities in Europe, offering plenty of breathtaking sights. Discover its many jeweled facets with a tour that caters specifically to passengers who want to soak up the sights from as many angles as possible.

There will be lots to see during your four-hour sojourn so be sure to bring along your camera to preserve everlasting memories.

Your adventure begins as you depart the ship by coach for a brief transfer to the pier at Embassy Park and board a sightseeing boat. Soon, your captain will guide his way out of the harbor and through the Helsinki Archipelago, home to 330 islands, islets and skerries and past the famous Suomenlinna Fortress. Hailed as the 'Gibraltar of the North', this UNESCO World Heritage Site has the rare distinction of serving in the defense of three superpowers: Sweden, Russia and Finland since its founding in 1748.

Pass through the Laajasalo Strait to view the Helsinki Zoo and the Icebreaker Pier, where Finland's icebreaker fleet rests at its summer mooring.

Next, you'll return to the pier. Back on dry land, you'll rejoin your coach and continue with your sightseeing tour.

Sit back and relax as you travel past some of the city's most iconic landmarks such as the Presidential Palace, a grand neo-classic government building that began life as a merchant's house when it opened in 1820; and the breathtaking Uspenski Cathedral. Built between 1862 and 1868 and adorned with 13 green-and-gold onion domes, it's noted as the largest Orthodox church in western Europe.

Then, you'll pause for photos at Senate Square, home of the Lutheran Church, built in 1852 as a tribute to the Grand Duke, Nicholas I, the Tsar of Russia.

From here you'll cruise down Mannerheim Street and past Parliament House, which houses Finland's government offices; Finlandia Hall, the National Museum, the Helsinki Opera House, and Olympic Stadium, built for the Olympic Games held in Helsinki in 1952.

Next on the agenda is a stop at Market Square, Helsinki's most famous open market. Once you step off the coach you'll have time to browse the square's many handicraft and souvenir stands, sample a Finnish treat at a pastry stand or take photos of your extraordinary surroundings.

Back on the coach you'll begin your return to your ship. En route, you'll stop at Sibelius Park. Tucked among the park's rugged natural beauty sits an abstract sculpture dedicated to Jean Sibelius, Finland's most famous composer. Made of welded steel to resemble organ pipes, the monument stands over eight feet tall, 32 feet wide and weighs 24 tons.

Photos taken, you'll reboard your coach where you can watch the sights of Helsinki go by as you return to port.

Order of tour may vary. Should the Market Square be closed, more time will be allotted at the Senate Square.

Re-board your motorcoach for drive back to ship